Journalist the latest victim of pre-election crackdown in Uganda 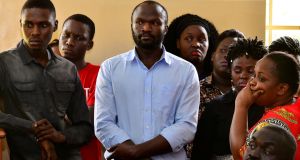 The arrest of Ugandan filmmaker Moses Bwayo has been condemned by the US and EU embassies, as well as international press freedom groups. Photograph: Reuters/Abubaker Lubowa

Ugandan journalist Moses Bwayo – who is facing charges for working on a long-term documentary about musician and opposition leader Bobi Wine – was released on bail on Friday after two days in prison.

His arrest has been condemned by the US and EU embassies, as well as international press freedom groups.

Bwayo was brought in to the courtroom at Makindye magistrates court, in Ugandan capital Kampala, handcuffed to another man. His beard and head had been shaved.

Along with eight others, Bwayo has been charged with “unlawful assembly” and “singing [a] song subverting or promoting subversion of the government of Uganda” while filming a music video on February 25th. He will be in court again next month.

The charge sheet, which was seen by The Irish Times, lists Bwayo as a journalist.

Uganda is gearing up for elections early next year, which will see significant challenges to the president, Yoweri Museveni, who has been in power since 1986, longer than most Ugandans have been alive.

Bobi Wine (38), whose real name is Robert Kyagulanyi, has been rallying young people across the country under his “People Power” movement. In recent months, his supporters have come under increased pressure, including being arrested or harassed by security. Last month one supporter was shot in the head while witnesses said another was run over by a police vehicle.

“With respect to the recent detention of Moses Bwayo, we urge Ugandan authorities to respect the constitutionally enshrined freedom of the press, and to protect the rights of journalists,” tweeted the US mission in Kampala on March 5th.

“I am concerned by reports that journalist Moses Bwayo has been remanded to Luzira prison on charges of unlawful assembly,” wrote Attilio Pacifici, the ambassador for the EU in Uganda. “While due process must always be followed, journalism is not a crime and it is vital for the authorities to protect media freedom.” A representative of the EU delegation was present in court on Friday.

Fellow journalists also showed up to support Bwayo, including members of the Foreign Correspondents’ Association of Uganda. In a statement on Wednesday, the FCAU called for the immediate release of Bwayo. “Independent journalism is a vital part of a free society and Ugandan authorities must not criminalise journalists reporting on opposition political groups,” the statement said.

“Come on Uganda – let’s not silence our own people,” tweeted award-winning Queen of Katwe film director Mira Nair, who once taught Bwayo.

“Unfortunately the state does not even give a damn about journalists,” Mr Alaka said. “I think it’s up to courts to stand up and protect the rights of journalists . . . They have rights to practice their profession and also to inform the whole public. It’s absurd that they can be arrested and charged and treated the way Moses has been treated. We condemn it.”