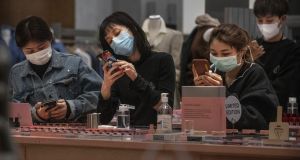 The US Senate has passed an $8.3 billion funding Bill to help state and local governments combat the spreading coronavirus, as public health experts outlined efforts to rapidly accelerate testing for the disease.

President Donald Trump is expected to sign the Bill into law so that the billions of dollars can flow toward developing vaccines against the highly contagious new coronavirus Covid-19, and aiding international efforts to control transmission. Mr Trump initially requested $2.5 billion, with much of that coming from already appropriated funds.

Action by Congress comes as US deaths related to coronavirus infections rose to 11 and new cases were identified on both coasts – around New York City and Los Angeles.

Also on Thursday, a patient with underlying health conditions became the first person in the UK to die after testing positive for the coronavirus. The older patient, reported to be a woman in her 70s, had been “in and out of hospital” for other reasons, but was admitted on Wednesday evening to the Royal Berkshire Hospital in Reading and tested positive.

The news comes as cases of coronavirus in the UK have more than doubled in 48 hours, and the country moves towards the “delay phase” of tackling the virus. Some 116 people have tested positive, including 105 in England, two in Wales, six in Scotland and three in Northern Ireland.

In China, the National Health Commission said the total accumulated number of cases of the Covid-19 virus in the country is now 80,409.

Mainland China reported a rise in new confirmed cases of the coronavirus on Thursday, reversing three straight days of declines, because of a spike in new infections in Wuhan, the provincial capital of Hubei, where the virus is believed to have emerged in a market late last year.

After what some critics said was an initially hesitant response to the new virus, China imposed sweeping restrictions to try to stop it, including transport suspensions, lockdowns of cities and extending a Lunar New Year holiday across the country.

World Health Organisation (WHO) officials have said other countries have much to learn from the way China has handled the outbreak, and vice-foreign minister Ma Zhaoxu said many countries had asked for help on the issue and China was responding.

More than 3,000 people have died from the virus in mainland China.

Meanwhile, Australia has banned the arrival of foreigners from South Korea, a hot spot for the virus, tightening its border controls as it recorded its second death from the virus.

Prime minister Scott Morrison also extended existing bans on foreigners arriving from mainland China and Iran and said there would be tougher screening processes for people arriving from Italy.

Australia has recorded 54 cases of the coronavirus, the majority of those people having contracted the disease overseas before returning home for treatment.

Confirmed cases of coronavirus infections in the Netherlands have more than doubled to 82, Dutch health authorities said.

Palestinian president Mahmoud Abbas declared a 30-day state of emergency after coronavirus cases were reported in the West Bank town of Bethlehem.

Iranian health minister Saeed Namaki announced on state TV that all schools and universities in Iran will be closed until the end of the Iranian calendar year on March 20th.

India shut all primary schools in the capital New Delhi until the end of March on Thursday and imposed new restrictions on travel from Italy and South Korea.

Hong Kong has quarantined the dog of a coronavirus patient in what could be the first case of human-to-animal transmission, although experts cautioned against pets being potential spreaders of the virus.– PA/Reuters