Harris: Coronavirus containment may not be possible indefinitely

Health minister says he expects to see ‘many, many more cases in Ireland’ 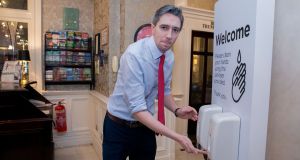 The Covid-19 Coronavirus outbreak will get worse in Ireland and containment of the virus may not be possible indefinitely, Minister for Health Simon Harris said in Brussels on Friday.

Ireland is currently in a “containment” phase, focusing on trying to isolate cases of the virus and identifying the chain of infection to try to curb its spread.  But Mr Harris said he expected the country to ultimately move into the next phase of “delaying” its spread, after containment is no longer feasible. ”The purpose of containment is to identify the virus, isolate the patient, and contact-trace to minimise the spread of that transmission and in our own country in Ireland we’re very much in that phase and we hope to remain in that phase for quite a period of time,” Mr Harris said. “I note in the UK they’re talking about a delay phase now where you look at measures you can do to slow down the further transmission of the disease. So I expect that we’ll move from one phase to another over a period of time.”

Mr Harris was among the European health ministers who gathered for an extraordinary meeting in Brussels to discuss the outbreak as cases reached 4,000 in Italy and hundreds across France, Germany and Spain. ”I think that we found this virus more than others because we had higher levels of checks,” said Italian health minister Roberto Speranza.   ”In a few days it will be apparent that this is a great common problem that affects everyone. Clearly at the moment Italy, France and Germany have the most significant numbers, but I think that this is a big problem for everyone, and we have to manage it together. This battle can’t be won alone. No one can win it alone. This virus doesn’t know borders.” The ministers were addressed by experts of the World Health Organisation and European Centre for Disease Prevention and Control, and agreed to increase international coordination to manage the spread of the virus, including plans to jointly procure supplies such as face masks to avoid a bidding war.

Several European countries have blocked exports of protective equipment, to avoid shortages in their own countries due to strains on supply. Restrictions on exports of pharmaceutical ingredients by India have also raised concerns of an effect on supplies of medicines. France and Germany said this underlined the need to increase medical production within Europe. The European Commission has also boosted funding for research on diagnostics and finding a vaccine.

“We’re trying to predict something here about a virus that we know very little about so it is absolutely right that people should be overly cautious and really proactive in making sure that we have enough supplies,” Mr Harris said.

The European health ministers agreed to raise awareness of the disease, strengthen protections for people most at risk from the virus including the elderly, and coordinate on containment measures including “evidence-based advice concerning travel to and from risk areas”.