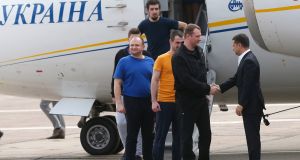 Kiev and Moscow have laid out their positions ahead of a possible peace summit, as western powers back a push by Ukraine’s new leader to end its five-year conflict with Russia.

French president Emmanuel Macron has offered to host talks in the coming weeks, but the diplomatic sparring between the two states hints at how hard it will be to end the war in eastern Ukraine that has claimed more than 13,000 lives.

Ukrainian president Volodymyr Zelenskiy wants to relaunch the peace process and appears ready to risk his soaring ratings to thrash out a deal with the Kremlin that could entail hard and unpopular compromises.

In a series of statements over the weekend, however, Mr Zelenskiy and his foreign minister Vadym Prystaiko mapped out Kiev’s red lines, while the Kremlin listed conditions that should be met before talks take place.

In the February 2015 Minsk agreement that reduced but failed to end the fighting in the Donbas region, Ukraine and Russia signed off on measures to bring areas seized by Moscow-led separatists back under Kiev’s control.

They included a full ceasefire; withdrawal of foreign fighters from the area; provision of special status for Donbas giving broad powers to local officials; elections in the region under Ukrainian law, and an amnesty for militants.

None of the steps have been implemented, however, due to daily shelling and skirmishes, Ukraine’s fear that Moscow wants to create a semi-autonomous Donbas to stymie the country’s integration with the West, and – despite its denials – Russia’s continuing military, financial and political support for the separatists.

Mr Zelenskiy said he hoped to meet the Russian, French and German leaders for talks “at the end of September”, but listed several things that must be done before elections could take place in areas now held by the militants.

“It’s firstly a question of exchanging [prisoners], then of withdrawing troops . . . Only after that can we talk about a format for elections in occupied territory,” he told an international conference in Kiev.

“Elections should take place there, but only under Ukrainian law,” he added.

Mr Prystaiko also said Ukraine would not write Donbas’s special status into its constitution or offer a blanket amnesty to all militants.

“Ukraine accepted an obligation to create a status for these regions based on decentralisation. . .There will be no special status for Donbas in the constitution,” he declared.

Senior Kremlin aide Yuri Ushakov, meanwhile, said he did not expect talks before October and that beforehand rival forces should be withdrawn from certain areas of the front line, and the summit’s conclusions and the mechanism for introducing special status in Donbas should be agreed in writing.

Allies of Mr Zelenskiy say he will face pressure to agree a deal with Russia from western states that want to repair relations with Moscow.

“President Zelenskiy might not be tall but he trains hard,” Mr Prystaiko quipped. “It won’t be easy to twist his arm.”