Brexit: Johnson says it is ‘absolutely' not true he misled queen 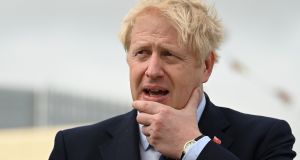 Boris Johnson has said it is “absolutely not true” that he misled the queen over his reasons for proroguing parliament, after a Scottish court ruled the suspension was unlawful because he had done so to stop MPs scrutinising Brexit.

The British prime minister has previously insisted he sought the suspension so that the UK’s government could set out a new legislative programme on October 14th – in what is known as the queen’s speech – but the court said the prorogation was obtained for the “improper purpose of stymying parliament”.

On Thursday, in his first comments since the judgement, Mr Johnson said the high court in London had taken an opposing view and it was for the supreme court to make a final adjudication.

Asked whether he had lied to the monarch in order to obtain the prorogation, Mr Johnson replied: “Absolutely not.” He added: “The high court in England plainly agrees with us but the supreme court will have to decide. We need a queen’s speech, we need to get on and do all sorts of things at a national level.”

However, the London court made no ruling on the truthfulness of his reason for the prorogation, simply ruling that it was a lawful move because suspension of parliament was within his powers regardless of the motive.

Mr Johnson also sought to play down a row over the role of Scottish judges in ruling prorogation unlawful after one of his ministers, Kwasi Kwarteng, claimed “many people” thought judges were biased in relation to Brexit.

Opposition parties continue to press Mr Johnson for a return to parliament, not least to scrutinise the possible effects of a no-deal Brexit as revealed in the official Operation Yellowhammer documents released by the government on Wednesday.

MPs secured the release of the papers through the use of a humble address in the Commons but cannot now force the publication of other documents because parliament is not in session.

Mr Johnson tried to minimise the significance of the paper, saying it represented a “worst-case scenario” and ministers had been “massively accelerating” their no-deal preparations since he entered No 10 in July.

Some MPs believe Mr Johnson is moving closer towards trying to achieve a Brexit deal after realising the scale of disruption associated with leaving without an agreement. However, securing one would probably involve having to disappoint hardline Eurosceptics in his party.

Mr Johnson said on Thursday: “I’m very hopeful that we will get a deal, as I say, at that crucial [EU] summit [in mid-October]. We’re working very hard. I’ve been around the European capitals talking to our friends. I think we can see the rough area of a landing space, of how you can do it. It will be tough, it will be hard, but I think we can get there.”

The EU’s chief negotiator, Michel Barnier, said they were still waiting to see proposals from the UK to resolve the fraught issue of the Northern Ireland backstop. “We are still ready to examine objectively any concrete and legally operational proposals from the UK,” he told reporters in Brussels.

Andy McDonald, the shadow transport secretary, said it was essential MPs returned to Westminster so they could question ministers about how Mr Johnson intends to secure a deal. “This is more like emergency planning for war or a natural disaster,” he told the BBC Radio 4 Today programme, discussing the Yellowhammer document. “We cannot minimise this. It does not get more stark.”

If Mr Johnson does not reach a deal with the EU, he is bound by parliament to request an extension to article 50, which he has repeatedly promised he will not do.

On a boat trip on Thursday morning to mark London International Shipping Week, Mr Johnson appeared to attempt to change the subject away from Brexit by raising the prospect of a bridge between Northern Ireland and Scotland, saying it would be “very good” and estimating the project would cost around £15bn.

He revealed his thoughts about the proposal – which has drawn scepticism from engineers – as he spoke to schoolchildren playing with a model container ship onboard the NLV Pharos, a lighthouse tender, on the Thames.

He told the children that he had recently been discussing the possibility of constructing a bridge over the Irish Sea. “I [was talking yesterday] about building a bridge from Stranraer in Scotland to Larne in Northern Ireland,” he said. “That would be very good. It would only cost about £15bn.”

It follows reports that Mr Johnson has asked government officials for advice on the costs and risks of such a project.

The DUP – who prop up Mr Johnson’s minority government – support proposals for a bridge which they hope could bring economic benefits to Northern Ireland and Scotland, but it has also been touted as a potential solution to the controversial backstop.