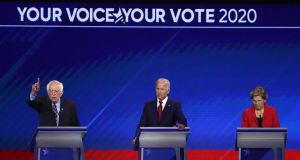 He’s in our heads. Even more than we knew. It isn’t just that he hovered over the Democratic debate on Thursday night: should the candidates attack him or leave him to self-destruct?

Were they talking about him too much or not enough? It’s more profound than that. Donald Trump has fundamentally altered the way we experience politics. We’ve been trying to figure out for three years if he is a mad aberration, doomed to fade, or if he is rewiring the game in some permanent way.

Watching that depressing debate, one must conclude that the rewiring is well under way. Trump is one of the phoniest people ever to walk the Earth. Maybe that’s why he was uniquely suited to tear through the phony conventions and bloated world of consultants that made up politics as usual.

There were a lot of good politicians on the debate stage in Houston. But the night rang hollow as they clung to the old conventions – the overcoached performances, the canned lines, the pandering, the well-worn childhood anecdotes meant to project “relatability”.

Tactics superseded passion and vision. Everyone seemed one tick off. Unlike with Barack Obama in 2008, none made you feel like you wanted to pump your fist in the air and march into the future behind them.

“Being a good politician doesn’t matter anymore,” lamented one freaked-out congressional Democrat afterwards. “It’s like being a great used-car salesman. We need a Holden Caulfield to call out all the phonies.”

It’s a paradox wrapped in an oxymoron about a moron: Trump’s faux-thenticity somehow makes the Democratic candidates seem more packaged, more stuck in politician-speak. In speeches and at rallies, Trump kicks over the traces, saying what’s on his mind, even though it often doesn’t mesh with reality, even though it lacks dignity and can be ugly and hateful.

Just consider his speech at the House Republican retreat in Baltimore, happening at the same time as the debate. Basking in chants of “Four more years!” Trump unleashed several buzzwords and crowd-pleasers, trashing eco-friendly paper straws and energy-efficient light bulbs.

“The bulb that we’re being forced to use – number one, to me, most importantly, the light is no good,” he said. “I always look orange. And so do you. The light is the worst. But, number two, it’s many times more expensive than that old incandescent bulb that worked very well. And very importantly – I don’t know if you know this – they have warnings. If it breaks, it’s considered a hazardous waste site. It’s gases inside.

The candidates struggled to alchemise our exhaustion into excitement

“And now it looks like she could beat Sleepy Joe,” Trump said. “He’s fallen asleep. He has no idea what the hell he’s doing or saying.”

He made a Pete Buttigieg short joke and referred to Alexandria Ocasio-Cortez as “Cortez” because her name, he said, is too long. He called the squad “AOC plus three” and warned of the “grim spectre of socialism”.

He mocked the Green New Deal, saying: “That’s a beauty. No more cows. No more planes. I guess no more people, right?” Then he teased Kevin McCarthy, House Republican leader: “Because Kevin is just like a cow. He’s just smaller.”

The split screen on Thursday night was riveting. You know that the barbarian behind the White House gates will run with all the ammunition the Democrats were supplying him in real time.

The president said, “Democrats want to confiscate guns from law-abiding Americans,” and Beto O’Rourke said, “Hell, yes, we are going to take your AR-15, your AK-47.” The president said the Democrats would impose “crippling taxes,” and Bernie Sanders and Elizabeth Warren proposed all their free stuff that would require tax hikes.

This exact display from Trump is just what many Americans find exhausting. It’s draining to live on the edge all the time, to be plunged into the culture wars – and now the straw and light-bulb wars – with the tweets and the tantrums and the put-downs, to feel that we’re being borne back ceaselessly into the past.

But how to counter this? “No one made the broadest, most appealing message for change,” David Axelrod said of the debate. “Can we, as a country, function anymore if we have another four years of waking up to turmoil?”

There were a bunch of high-end, professional pols there and yet no one actually won it. Not a good sign. The candidates struggled to alchemise our exhaustion into excitement.

The three hours seemed endless, with two questions hanging over the night: “Can’t anybody here play this game?” and “Will the most beatable candidate in American history win twice?” – New York Times