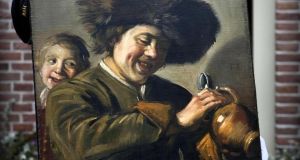 Frans Hals painting was stolen twice before in The Netherlands in 2011 and 1988. Photograph: Ilvy Njiokiktjien

A work by the 17th-century Dutch Golden Age portrait artist Frans Hals, worth about €15 million, has made art theft history by being stolen from the same museum for the third time in just over 30 years.

In the latest in a series of robberies worthy of Ripley’s Believe it or Not!, the painting, Two Laughing Boys with a Mug of Beer, was snatched in the early hours of Wednesday – the anniversary of the artist’s death at the age of 83 on August 26th, 1666.

It had previously been stolen from the same museum, the Hofje van Mevrouw van Aerden, in Leerdam, near Utrecht, in 2011 – and before that, for the first time, in 1988.

The old master was stolen on both those occasions with another artwork, Forest View with Flowering Elderberry by Jacob van Ruisdael, less known outside the Netherlands but considered the leading landscape painter of the Golden Age.

After the 1988 theft, it took specialist art detectives three years to recover the two paintings by means that remain unclear. In 2011, they were tracked down after just six months when the four burglars tried to sell them on the international market – and were arrested in the process.

On this third occasion there was no mention of the van Ruisdael painting.

Security at the museum was believed to have been tightened considerably after the second theft, with its most valuable works available for viewing only under supervision in a special holding area.

Even so, it seems the theft didn’t pose much of a challenge. The museum has been closed since the start of the coronavirus lockdown. The thieves triggered an alarm when they forced a back door, but by the time the police arrived at 3.30am, they were apparently long gone.

Frans Hals The Elder – a contemporary of Rembrandt van Rijn and Johannes Vermeer – is best known for The Laughing Cavalier, completed in 1624 and now part of the Wallace Collection in London.

Two Laughing Boys, which Hals finished in 1626 in his characteristic “playful, daring and loose” style, in the words of Hals specialist Anna Tummers, is the second major painting to be stolen in the Netherlands since coronavirus hit.

A work by Vincent van Gogh entitled Parsonage Garden in Nuenen in Spring was taken from the Singer Laren museum east of Amsterdam on March 30th – the day van Gogh was born 176 years ago.