How Phil Hogan became the architect of his own downfall 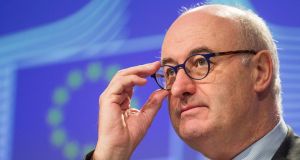 It was on the fourth consecutive day that the matter of commissioner Phil Hogan’s activities in Ireland hijacked the European Commission’s daily press briefing that seasoned Brussels correspondents began asking when they had ever seen a story run so long.

After rounds of questions from Politico, the Guardian, and Italy’s Il Foglio, the affair began to be compared to the so-called Selmayrgate, a long-running controversy surrounding German official Martin Selmayr, a figure of Machiavellian reputation nicknamed the Beast of the Berlaymont.

When Hogan’s difficulty first came to the attention of Brussels last Friday, it seemed like a matter that could easily blow over: a golf dinner back home that as far as the commission was concerned their man had attended in good faith.

But spokeswoman Dana Spinant was to volunteer an additional claim that day that would become crucial to why the story refused to die.

“Upon his return from Brussels to Ireland for the summer holidays he had self-isolated himself for 14 days in accordance with the local regulations in Ireland,” Spinant told journalists. “This is an example of how seriously he takes rules and regulations on Covid-19.”

Within days Hogan had admitted he in fact cut short his quarantine period to play golf in Co Limerick, and eyewitnesses came forward to say they saw him publicly socialising in the K Club in his supposed period of self-isolation.

It wasn’t the initial flouting of rules, but the continued drip of revelations that appeared to show Hogan had misled his boss and allowed spokespeople to give untrue accounts that caused the mood to darken.

When yet more revelations emerged that poked holes in an account furnished to the commission that he claimed was comprehensive, a WhatsApp message issued from an official in the Berlaymont late on Tuesday that read “This is it”.

Even supporters were genuinely at a loss to understand why Hogan had continued to conceal details, which on their revelation further undermined him and built momentum for his downfall.

“It seems so minimal,” one observer remarked of his initial offences. “So why is he allowing there to be a new revelation every day? Why did he not come clean in the first instance?”

Hogan’s departure pleases few. He was viewed as effective in the post, and a valued defender of free trade against protectionist impulses, particularly among the northern countries of the EU’s so-called Hansa League.

But by Wednesday he had so damaged his image as a clever political operator that he could only have stayed as a much weakened figure, owing his position to the discretion of European Commission president Urusla von der Leyen, and far from the powerhouse he had been.

Given the circumstances, even some of his staunchest allies came to view his departure as for the best.

There was a glimpse of the work left unaccomplished in what was to be his last public appearance as trade commissioner, an online conference hosted by the EU’s delegation to the United States on the Republican National Convention sidelines, at which he praised the importance of transatlantic trade.

“I do appreciate the very strong collaboration that I have developed with Ambassador Lighthizer and his team,” Hogan said in reference to the US trade representative. “I am very anxious to continue that collaboration with him.”

But as he spoke, discussion was already under way as to who could be his replacement.

According to well-placed analysis, Dublin has a shot at retaining the influential trade portfolio. But only if the Government does not pick a high-profile Irish politician, but instead nominates someone with a more technical background to the liking of von der Leyen.

Lobbying has already begun for the plum job, and Hogan’s supporters are now keen to keep it from falling into the hands of one of the powerful states with a more protectionist bent, such as France, Italy, or Spain.