Shinzo Abe: A resilient leader who tilted Japan to the right

Shinzo Abe, Japan's longest-serving prime minister, has announced that he is resigning due to health complications caused by ulcerative colitis, a disease that has afflicted him since his teens. Video: Reuters 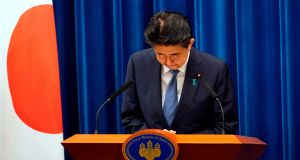 After Shinzo Abe returned to office in December 2012, he famously made a pilgrimage to the tomb of his grandfather, Nobusuke Kishi, where he pledged to “recover the true independence” of Japan.

Kishi was a minister in the second World War cabinet of prime minister Hideki Tojo, and later arrested by the Allied occupation as a suspected Class-A war criminal. He was subsequently freed without charge and became prime minister in 1957.

Abe – who stepped down as prime minister on Friday due to health reasons – channelled his grandfather’s political philosophy. The legacy of Japan’s defeat – emperor demoted, military neutered – was a temporary debasement. Above all, independence meant casting off the alien 1947 constitution imposed by the victorious Americans.

In his biography, Beautiful Japan, Abe recalls a childhood stigmatised by his family’s association with the out-of-fashion politics of his grandfather, and his resentment at the hold of left-wing ideas on postwar education and intellectual life.

As the son of a former foreign minister and the nephew of another prime minister, there was never much doubt he would enter politics. But his first inglorious term as leader, in 2006-7, was by common consensus doomed by his pursuit of narrow ideological issues.

He pleased his supporters by injecting patriotism into the public education system, but spent precious political capital in spats with China and South Korea over Japan’s role in the war. Abe’s base disputes much of the history of that period, including evidence of war crimes.

Abe returned to power in December 2012 with a slick campaign to haul Japan out of the doldrums. He played to fears of being eclipsed by fast-growing neighbour China, which had overtaken Japan as the world’s second-largest economy the previous year. “Japan is back,” he announced.

Given the context, it was an inspiring slogan. Japan’s economy had slowed to a crawl, growing at just 0.6 per cent annually in the years 1997-2012. No fewer than 17 leaders had rotated through the prime minister’s office. Reinforcing the sense of malaise was the nation’s ageing, shrinking population.

Luck was on his side, thanks to an upswing in the global economy and the weakness and disarray of Japan’s opposition parties. Abe’s economic medicine – deficit spending and monetary tinkering to end years of deflation – stoked corporate profits and the stock market, and weakened the yen, helping to fuel a tourism boom.

Covid-19 wiped out many of these gains. Foreign visitors stopped coming. The government was forced to postpone the 2020 Tokyo Olympics, the jewel in the crown of the tourism drive. Annualised GDP in April-June plummeted by ¥41 trillion, below the point (¥498 trillion) when Abe took power.

Even had the virus stayed in Wuhan (and Japan has done better than most at weathering its impact) the legacy of Abenomics would be in dispute. The Bank of Japan never achieved its aim of hitting an inflation target of two per cent, despite years of muscular intervention.

Doubling the consumption tax to 10 per cent did little to improve fiscal conditions – public debt is still hovering at more than twice annual GDP. Even if the economy rebounds by 2022, as many predict, recovery from the virus is likely to send debt soaring again – as it has in all the major economies.

Abe certainly brought political stability: he overcame multiple scandals to become Japan’s longest-serving leader in history on Monday at 2,799 days in a row, overtaking his uncle, Eisaku Sato. His resilience in itself convinced many in the world of business and politics that his policies were to be taken seriously.

His attempts to concentrate power around his office will probably outlive him, as will his corporate governance reforms. Despite low expectations, Abe became an unlikely and tireless ambassador for global free trade, pushing through several landmark agreements, including the Japan-EU free trade deal.

Yet, his successor will inherit not only Japan’s grim demography (government projections say the workforce could collapse by 20 per cent before 2040) but many of the same diplomatic headaches: Japan still has territorial disputes left over from the war with its three closest neighbours: Russia, China and South Korea.

His supporters will argue that all this would be worse were it not for Abe’s pragmatic leadership. Many nations would love to have Japan’s problems: prosperous, peaceful and almost crime-free and with full employment

Abe’s mix of fiscal stimulus, zero interest rates and asset purchases – with a leg up for business and consumers – is now the de-facto standard for global economies struggling to deal with the aftermath of Covid-19.

His detractors, however, lament Japan’s illiberal drift under his tenure: conspiracy and secrecy laws, and a controversial reinterpretation of the constitution allowing the military to play an expanded global role that helped reignite mass protests. School textbooks have removed references to war crimes and increasingly reflect the government’s position on territory.

History may well record him as a political caretaker who tilted Japan to the right rather than a leader who radically changed the status quo. His inability, meanwhile, to make any headway in rewriting the hated constitution means that Abe himself will probably see his own 7½ years in office as a failure.