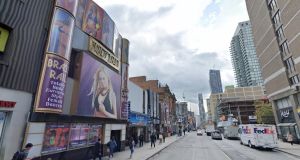 Health officials in the Canadian city of Toronto have warned that as many as 550 people may have been exposed to the coronavirus at a downtown strip club after an employee tested positive for the virus.

The potential exposure took place just days after the Brass Rail Tavern, one of the city’s best-known strip clubs, was allowed to re-open. The employee worked four shifts in early August, the city said in a statement, without detailing the capacity in which the employee worked.

Health officials said they had reached out to the clients that had left their details in the establishment’s contact-tracing log, urging them to monitor for any symptoms of Covid-19.

Public health experts, however, questioned how many patrons would have handed over legitimate contact information.

Toronto health officials suggested their initial investigation found the club to be lacking when it came to following the required protocols, which include distancing between staff and customers and the use of a plexiglass shield when this is not possible.

Ontario’s premier Doug Ford weighed in on Friday. “There are 500 people - you’ve got to practice social distancing, you’ve got to put on a mask – I know it sounds ironic talking about that – you have to.”

His thoughts soon turned to the strain the news could take on relationships. “I feel sorry for people when they go to their house and tell them that they were at the Brass Rail,” he quipped. “That’s who I feel sorry for. Sorry for the spouse, seriously. Man, I wouldn’t want to be on the end of that one.”

Others questioned the decision to allow such establishments to open as the province grapples with a pandemic that has seen more than 40,000 people test positive to-date.

The Australian state of Victoria recorded another 16 coronavirus deaths on Sunday as well as 279 new cases, as the premier Daniel Andrews expressed “cautious optimism” that the state’s harsh stage-four restrictions were finally bringing the crisis under control.

“These numbers are heading in the right direction,” Mr Andrews said. “They speak to a strategy that is working. At the same time, no one day necessarily guarantees the outcome – that is a long hard slog.”

The 16 deaths – among people aged in their 70s, 80s and 90s – were broadly in line with the daily fatalities of the past week, except the four deaths recorded on Saturday, which the state’s chief health officer, Brett Sutton, had acknowledged was likely a “blip”.

Mr Andrews said 11 of the 16 deaths were linked to aged care, where there are now 2,075 active cases, while there were 662 Victorians in hospital, including 40 people in intensive care. There are also 1,164 active cases among Victorian healthcare workers.

In New South Wales, meanwhile, a man in his 80s died, as the state recorded five new Covid-19 cases on Sunday.

NSW Health said three of the new cases were linked to a cluster at Tangara School for Girls, another, a man in his 40s, was locally acquired and still being investigated, while a fifth case was a contact of the man.

The department has identified a Crust Pizza outlet in Concord, Den Sushi in Rose Bay, Cafe Perons in Double Bay and Horderns Restaurant at Milton Park Country House Hotel and Spa in Bowral as venues where the confirmed cases had visited.

Commenting on Victoria’s improved figures, Mr Andrews noted the seven-day average had only recently sat at about 700 infections. It has now fallen to 328.

Mr Sutton said the reproduction rate, which authorities try to keep below one, was now sitting at about 0.86.

The United Kingdom recorded 1,040 new positive cases for Covid-19, the government said on Sunday, the sixth day in a row where they were have been more than 1,000 infections in the daily figures.

A further five people were reported to have died within 28 days of testing positive for the coronavirus.

Ministers in the UK have been accused of trying to deflect attention from their own failings during the Covid-19 pandemic by planning to scrap Public Health England before a potential second wave.

It emerged on Sunday that PHE is set to be merged with NHS Test and Trace to form a new body called the National Institute for Health Protection.

Downing Street has been frustrated for months by PHE’s limited capacity to test samples for coronavirus and trace the contacts of those infected, and the way it counts Covid-related deaths.

Critics, however, said ministers were scapegoating PHE for failures by central government and NHS Test and Trace, and that the reorganisation was badly timed given the continuing threat posed by the virus.

Prof John Ashton, a former regional director of public health, said of the plan: “It completely fails to understand the issue and would compound the problem. It is more distraction and blame shifting when what is needed is reform, strengthening and decentralisation.”

Referring to the potential appointment of the NHS Test and Trace chief executive, Dido Harding, as the boss of the new institute, Ashton said: “You don’t do this in the middle of a crisis, and certainly not put Dido in charge when she has been such a disaster with test and trace.”

South Korea has reported 279 new coronavirus cases in the highest daily jump since early March, as fears grow about a massive outbreak in the greater capital region.

The figures released by the Korea Centres for Disease Control and Prevention on Sunday brought the national caseload to 15,318, including 305 deaths.

The number of new cases is the highest since 367 on March 8th, when the country was concentrating public health tools and personnel nationwide to bring an outbreak in the less populated southern region under control.

The KCDC said 253 of the new cases came from the Seoul metropolitan area, home to 26 million people, where health authorities have been struggling to stem transmissions linked to churches, nursing homes, schools, restaurants and door-to-door salespeople.

India’s coronavirus fatalities neared 50,000, with 944 new deaths reported in the past 24 hours.

India now has the fourth-highest fatalities, behind the US, Brazil and Mexico, according to Johns Hopkins University data.

There has been a big spike in Covid-19 fatalities in India in August, with more than a quarter of the country’s total in the past 15 days.

Prime minister Narendra Modi said on Saturday that three vaccines are in different phases of testing and mass production will begin as soon as scientists give their approval. – Guardian and agencies