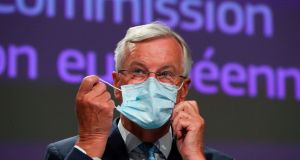 Brexit negotiator Michel Barnier: “Frankly I am disappointed and I am worried.” Photograph: Yves Herman/POOL/AFP via Getty Images

The EU’s Brexit negotiator has warned that valuable time is being wasted in trade talks with the UK as he accused his British counterparts of failing to make progress on topics of key interest to Europe during the latest round of trade negotiations.

Michel Barnier said he was disappointed, concerned and surprised by the lack of progress displayed in discussions that took place in Brussels this week, reiterating that at this stage an agreement between the two sides still looked unlikely and that there was a risk the two sides would fail to ratify a deal by the end of the year.

“Too often this week it felt as if we were going backwards more than forwards,” Mr Barnier said at a press conference following the conclusion of the latest negotiations. “I simply do not understand why we are wasting valuable time.”

The failure to advance the discussions that began on Tuesday evening leaves only a narrow window in which to agree the text of a trade agreement, translate it into multiple European languages and obtain ratification before the post-Brexit transition period ends on December 31st.

While both the UK and EU insist they want a deal, EU officials decried a lack of momentum on the British side in the wake of Thursday’s session, with one describing it as “puzzling”.

David Frost, the UK’s chief negotiator, acknowledged in a separate statement that there had been “little progress” during the week’s talks, but he also insisted that a deal remained possible even if it would not be easy to achieve.

The EU wants the two sides to push towards a common understanding on the topics of state aid and fisheries, rather than leaving these highly sensitive topics until later in the talks, but British negotiators are seeking to advance to a legal text in other areas where the two sides are closer together.

Lord Frost criticised the EU’s approach on Friday. “The EU is still insisting not only that we must accept continuity with EU state aid and fisheries policy, but also that this must be agreed before any further substantive work can be done in any other area of the negotiation, including on legal texts,” he said. “This makes it unnecessarily difficult to make progress.”

Mr Barnier complained that he was not seeing any willingness on the UK side to take on board the EU’s priorities, adding that the need for a “level playing field” that ensures fair competition in areas including state aid would not go away and was a non-negotiable precondition to any trade deal.

“No international agreement was ever reached without the parties agreeing to common rules,” he said. The notion of a zero-tariff, zero-quota agreement without level playing field provisions and a balanced deal on fisheries was a “non-starter” for the EU, and the absence of progress in these areas was blocking everything, he warned.

British negotiating officials said the talks were stalling due to the problematic issues of fishing and state aid, over which they accused the EU of seeking to maintain the status quo.

“What is frustrating is that Barnier wants to see us continuing arrangements very like those we had as members of the EU. The principle of ‘Brexit means Brexit’ is a good one and should be applied across the board,” the official said.

“The process block now is that we must accept their position on state aid and fisheries before we can talk about anything else. We’re obviously not going to do that, so we’re frozen.”

Mr Barnier confirmed that the UK had presented a draft legal text for the trade deal during the round of talks, but he added that this had not addressed the EU’s key concerns, serving instead as a reminder of the UK’s existing positions.

Lord Frost added that the UK was seeking a relationship that ensures Britain regains “sovereign control of our own laws, borders, and waters” and is similar to other agreements struck by the EU elsewhere. “When the EU accepts this reality in all areas of the negotiation, it will be much easier to make progress.”

A dinner between Mr Barnier and Lord Frost was held on Thursday evening after negotiations concluded, which officials suggested was tense following the lack of progress. “It was a very nice dinner, we had courteous and friendly discussions but we didn’t hide the difficulties between us,” one individual said. – Copyright The Financial Times Limited 2020