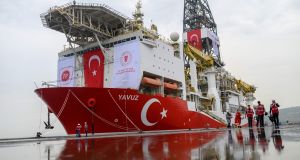 Turkey is set to deploy a fourth ship to explore for gas and oil off the coast of Cyprus in defiance of EU sanctions imposed to end Ankara’s illegal operations around the island.

“There is no reason to take [EU measures] very seriously,” said Turkey’s foreign minister Mevlut Cavusoglu. “We have three ships there. God willing we will send a fourth ship to the Eastern Mediterranean as soon as possible.”

His statement reflects the line adopted by Turkish president Recep Tayyip Erdogan, who said “we are going to stand tall” in response to pressure from the EU, US, Greece, Cyprus and other powers to curb Turkey’s activities involving Cyprus, Greece and Syria.

EU foreign ministers have decided to cut €145.8 million from its €4 billion in aid to Turkey for 2020, suspend high-level talks, review European Investment Bank loans, and halt negotiations on the Comprehensive Air Transport Agreement.

The EU stance was approved by the US but sanctions-targeted Russia criticised the action against Turkey as Moscow opposes the use of sanctions in principle.

The Turkish ship Fatih began drilling in May off the western coast of Cyprus within the country’s exclusive economic zone (EEZ) in violation of international law. A second drill ship, Yavuz, is set to start operations shortly, while a Turkish exploration vessel, Barbaros Hayrettin, has been deployed south of Cyprus.

The fourth ship, Oruc Reis, will be dispatched to Cyprus after completing work in the Sea of Marmara.

The Cyprus government has dismissed Greek and Turkish Cypriot newspaper reports that the Fatih has discovered a reservoir containing 170 billion cubic metres of natural gas. If the reports are correct, however, this find could rival the Exxon-Mobil and Qatar Petroleum field that could yield 142-227 billion cubic metres.

A major Turkish discovery could dramatically increase tensions between Cyprus and Turkey, particularly if Cypriot-licensed foreign firms begin drilling ex- ploratory and appraisal wells within the island’s EEZ over the next two years.

A senior Cypriot source told The Irish Times Turkey has ships for prospecting and drilling for oil and gas but cannot mount complex operations to harvest finds and would need to rely on foreign firms that would face arrest warrants.

Greek-Cypriot political parties have rejected a proposal put forward by Turkish-Cypriot president Mustafa Akinci for the establishment of a joint committee to co-operate on hydrocarbons and manage revenues to benefit both communities.

The parties stated that the proposal could not be accepted “as it distracts from the essence of the Cyprus problem and the need for immediate resumption of substantive negotiations” to reunite the island. Cyprus has been divided since Turkey occupied the north 45 years ago, following an attempted coup by the Athens military junta.