At least 33 dead in arson attack at Japan animation studio

Many more injured, including man believed to have started the fire at Kyoto building 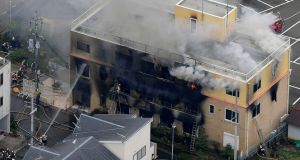 Smoke billows from a three-storey building in a fire in Kyoto, Japan, on Thursday. Photograph: Kyodo News via AP

An arson attack on a famed animation studio in Japan has left at least 33 people confirmed dead in one of the country’s worst modern mass killings.

Many more were injured, some critically, in the attack in Kyoto city on Thursday morning.

A man arrived at the studio, sprayed what appeared to have been petrol and screamed “shi-ne” (die!) as he set it alight, according to witnesses quoted in multiple news outlets.

Reports said he had bought the fuel from a nearby petrol station.

Police say there were about 70 people in the three-storey building at the time. Some were seen fleeing into the streets, bleeding or barefoot, after the blaze started. But dozens were left trapped inside as the fire caught hold.

Most of the victims’ bodies were reportedly found on the second and third floors, or on the stairs, apparently caught in the inferno as they tried to escape to the roof and exits.

The studio head told reporters his company had received anonymous online threats in the past but had no idea why it was targeted. “Why on earth did such violence have to be used,” asked Hideaki Hatta.

The suspect, a 41-year-old man, was arrested nearby while trying to escape, chased by studio employees. Police say he has admitted starting the blaze, according to sources quoted in the media.

Witnesses interviewed on television said the suspect was badly burned in the attack and was taken to a local hospital.

One told journalists she hosed the suspect down with water when she saw him lying on his back outside her door, barefoot and bleeding, with his skin peeling.

There are no reports yet of a motive but the woman said she heard the man say: “How dare they steal my idea.” Police are investigating the possibility that he held a grudge against the studio. Initial reports say he had a criminal history and was arrested for theft in 2012.

Locals said they heard bangs and screams inside the studio before a convoy of fire engines arrived to put out the fire, which gutted the building. Thick black smoke was seen billowing across the local neighbourhood. A medical tent was set up to treat the injured.

Television pictures showed bloody footprints on the concrete around the studio, which sits in a residential area of the ancient Japanese capital.

“I saw people who were totally black or covered in blood, or who had suffered burns all over their body. One of them claimed to have been splashed with kerosene or something like it,” a woman told Kyodo News agency.

Doctors in Japan must confirm deaths before they can be officially reported.

Prime minister Shinzo Abe tweeted that the events in Kyoto had left him “speechless”. “I would like to express my sympathies to the injured people and pray for their early recovery.”

Kyoto Animation, founded in 1981, is best known in Japan for producing comics and TV programmes popular with children. One of its biggest hits, The Melancholy of Haruhi Suzumiya, based on a series of mini-novels, ran on TV from 2006 and 2009. Violet Evergarden, another series produced by the studio, was screened by Netflix last year.

Fans of the studio took to social media on Thursday to grieve for the victims. “Who would do such a terrible thing,” said one post. “I hope the person who did this is severely punished.” A crowdfund campaign set up to help rebuild the studio had already earned €295,000 as donations poured in from across the world.

The arson attack is the deadliest in Japan since October 2008, when a man set fire to an all-night adult video shop in Osaka, killing 16 people. The perpetrator, Kazuhiro Ogawa (49), was sentenced to death in 2011.