US House of Representatives votes down article attempting to impeach Trump 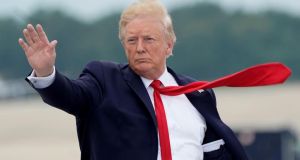 By agreeing to table the article, Nancy Pelosi and the Democrats put off – at least for now – a prolonged and divisive debate over whether Mr Trump’s conduct warrants his expulsion. Photograph: Kevin Lamarque/Reuters

The US House of Representatives on Wednesday killed an attempt to impeach president Donald Trump for statements that the chamber condemned this week as racist, turning aside an accusation that he had brought “ridicule, disgrace and disrepute” to his office.

The vote to table the impeachment article, drafted by lawmaker Al Green, constituted the first action by the House since Democrats took control in January on a measure to impeach Mr Trump, a significant move that house speaker Nancy Pelosi and other party leaders have toiled to avoid.

By agreeing to table the article, Ms Pelosi and the Democrats put off – at least for now – a prolonged and divisive debate over whether Mr Trump’s conduct warrants his expulsion.

But the measure highlighted the rifts among Democrats about how to deal with Mr Trump, between progressives who want to challenge him more aggressively and moderates desperate to quash talk of impeachment and stick to a poll-tested agenda that includes improving health coverage and raising wages for working people.

Ms Pelosi has been caught in the middle as she tries to maintain some semblance of control over the party’s agenda as Trump dictates the terms of the debate. Those dynamics have already dominated the House’s business this week.

For two days, Democrats feuded with the president over nativist posts on Twitter about four freshman Democratic congresswomen of colour, culminating in a nasty floor fight Tuesday that left progressives energized but moderates fretting over wasted precious time.

“You have to give him credit: He’s a great distractor,” Ms Pelosi said of Mr Trump on Wednesday. She waved off questions about whether the Democrats’ policy priorities were being eclipsed by the president’s antics, saying, “We’re not having him set our agenda; we’re setting our own agenda.”

So interesting to see “Progressive” Democrat Congresswomen, who originally came from countries whose governments are a complete and total catastrophe, the worst, most corrupt and inept anywhere in the world (if they even have a functioning government at all), now loudly......

Mr Green’s resolution makes no mention of Robert Mueller’s report or other instances of possible abuses of power by the president that are being studied by the House Judiciary Committee as possible grounds for impeachment.

Ms Pelosi said that she had no quarrel with Mr Green, but that the House was already taking sufficient steps to hold Trump accountable for his conduct.

“We have six committees that are working on following the facts in terms of any abuse of power, obstruction of justice and the rest that the president may have engaged in,” she said.

“That is the serious path that we are on.”

Even supporters of opening an impeachment inquiry into Mr Trump conceded that Wednesday’s vote would likely have little impact on their own efforts. “At some point, we have to be more focused on success than noise, and I just think this will feel a lot more like noise,” said Dan Kildee, an impeachment supporter.

Speaking with reporters Wednesday morning, Mr Green acknowledged differences with Democratic leaders but framed his decision to force the impeachment vote as strictly a matter of conscience. After listening to what he called Mr Trump’s racist attacks on four Democratic congresswomen, he said he felt he could not wait to act.

“I will do this even if I am the only person involved in the process, because there are some times on some issues when it is better to stand alone than not stand at all,” he said. He added: “We cannot wait. As we wait, we risk having the blood of somebody on our hands, and it could be a member of Congress.”

Mr Green had advice for moderate Democrats worried about how a vote on any resolution referencing impeachment would impact their reelection prospects. “If you voted yesterday to condemn the president, you voted yesterday for that resolution. The people who are going to vote against you are already going to vote against you,” he said. “Deciding today that you are not going to impeach will not exonerate you.”

Mr Green, who first drafted articles of impeachment after Mr Trump’s comments about the clash between white supremacists and protesters in Charlottesville, Virginia, has twice before forced similar votes.

But in both cases, Republicans controlled the chamber and voted overwhelmingly to table his resolutions.

“It’s time for us to deal with his bigotry,” Mr Green said Wednesday. “This president has demonstrated that he’s willing to yell ‘fire’ in a crowded theatre, and we have seen what can happen to people when bigotry is allowed to have a free rein. We all ought to go on record. We all ought to let the world know where we stand when we have a bigot in the White House.” – New York Times