About 1,500 disappeared and 1,000 dead remain unidentified after five-year war in east 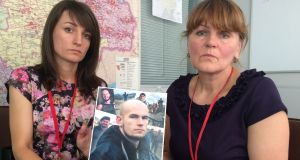 Lyudmyla Bilenka and her daughter Yarina with a photo of her son Roman Bilenkyi who disappeared during a mission in eastern Ukraine’s war zone in August 2014. Photograph: Daniel McLaughlin

Roman Bilenkyi’s war in eastern Ukraine was brutally short, but his mother Lyudmyla has no idea how or when her struggle to find him will finally end.

When Bilenkyi’s cousin in the special forces told him about the parlous state of Ukraine’s military, he joined a vast volunteer effort to raise money, buy supplies and deliver them to ill-equipped and hard-pressed troops in the east.

“By the summer, Roman was telling me that nearly all his friends were at war and that he was planning to go too,” Lyudmyla Bilenka says of her only son, who turned 27 the year Russia started sending fighters and arms into Ukraine.

“He said he couldn’t look them in the eye if he stayed at home,” she recalls, her voice catching on the memory.

She urged her son to go abroad to sit out the war, telling him: “I prayed for your life when you were on Maidan. I’m really scared that I’ve already asked God for too much, and that my prayers won’t be answered again if war begins.”

Tears flood her voice as she repeats his reply: “‘I can be most useful in the place I was born. I’m not leaving.’”

Bilenkyi joined the ultranationalist Azov battalion, which like other volunteer units fought in some of the fiercest battles at the start of the war.

On August 27th, 2014, he set out in a three-man reconnaissance team towards a village about 10km from the border with Russia, in territory that was about to be seized by separatist forces backed by Russian troops.

“We spoke in the morning and he told me he was going on a job and would call that evening,” says Lyudmyla.

“About 4pm they called their comrades to say they were returning to base but had to take a different route because the area was full of enemy soldiers and equipment. Then contact was lost. The lads didn’t come back.”

Maksym Khudan, another member of the reconnaissance team, was paraded as a prisoner on separatist-run television a few days later, but since then there has been no news of his fate.

Nearly five years on, Lyudmyla (59) has no idea whether her son is among more than 13,000 people who have been killed in the war, or one of an unknown number of Ukrainians now held captive in separatist-run territory or in Russia.

Ukraine’s new president Volodymyr Zelenskiy has made it a top priority to bring prisoners home, and hopes have risen in recent days that an exchange of captives could take place shortly after Sunday’s parliamentary elections.

Only 150 names were on a list of prisoners that Ukraine handed to Russia this week, however, while Bilenkyi is among an estimated 1,500 people – half of them civilians –whom the International Committee of the Red Cross (ICRC) estimates have gone missing on both sides of the frontline since 2014.

Exact figures are elusive, however, because neither Ukraine’s government nor the militants have full lists of the missing, and Russia publicly denies its obvious involvement in the war and offers no information on how many of its citizens have fought, died and disappeared in Donbas.

Ukraine’s state apparatus nearly collapsed in the bloody upheaval of 2014, and medical services struggled to cope with casualties and the retrieval and identification of people killed in the east.

The ICRC believes there are about 1,000 unidentified bodies in Ukraine’s morgues and cemeteries, and it is helping the country develop legal and technical means to handle the issue, as well as facilitating efforts to find the missing and helping their relatives with everything from financial support to counselling.

“In general terms, the Ukrainian authorities’ response has been good. It’s a positive step that they approved a law and a commission on missing persons while the conflict is ongoing. But it takes time and there is no easy solution,” says Maria Dolores Morcillo Mendez, the ICRC’s regional forensic co-ordinator in Ukraine.

“There is no consolidated list of missing persons and non-identified bodies. We let them know that this is the first step in understanding the scale of the problem and designing a better approach to solve these cases . . . By comparison, after a plane crash for example, the first thing you need is a list of passengers.”

In looking for Bilenkyi, Lyudmyla has sought the help of people in the military, volunteer groups, relatives in Ukraine and Russia, and even an influential figure in the criminal world with contacts in separatist-held territory.

She has received scraps of unconfirmed information, possible leads and anonymous text messages that sustain her hope of finding her son, as well as demands for money from people claiming to know his whereabouts.

“It’s an extremely complex issue,” says Morcillo Mendez, who has worked in the field of missing persons for 22 years from her native Colombia to the Balkans.

“It is an ambiguous loss, they don’t know if their relative is alive or dead, it is like a life on standby with all the suffering and uncertainty that this entails,” she explains.

“I believe it’s crucial to provide answers to the families of missing persons, and that will also have an impact on communities, society and on the process of reconciliation that a country or countries go through after conflict.”

What can Zelenskiy do now, if for five years the authorities did absolutely nothing to find their own citizens?

Zelenskiy’s predecessor, Petro Poroshenko, insists he did everything possible for Ukraine and its servicemen in the face of Russia’s hybrid war.

Lyudmyla accuses him of failing to properly equip and lead the country’s defenders, however, and like many people linked to volunteer battalions, she believes the billionaire and his allies did not want ultranationalists and other radicals to return from war to demand real change in Kiev.

“What can Zelenskiy do now, if for five years the authorities did absolutely nothing to find their own citizens?” asks Lyudmyla, who says her pile of notebooks and documents on her son’s case contrasts with an almost empty official file.

“I’m not talking about getting the lads back or buying their freedom – I’d figure out how to do that if I got to that point. But the authorities at least should have tracked them down.”

“I’ve heard so many different words and promises that I stopped believing people in power,” she says of Zelenskiy’s vow to bring prisoners home.

“Now parliamentary elections are coming up and perhaps they’re playing games with voters again. Let’s see what they do afterwards – that will show us what they’re really like.”