Crowd chants 'send her back' as Trump talks about Ilhan Omar

Members of the audience at a Donald Trump rally in North Carolina chant "send her back" as the US president intensifies his attack on Somali-born Democratic congresswoman Ilhan Omar. Video: C-Span 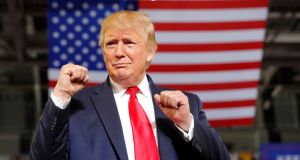 US president Donald Trump intensified his attack on Democratic congresswoman Ilhan Omar at a campaign rally in North Carolina on Wednesday night, prompting chants of “send her back, send her back” from the crowd.

Addressing thousands of supporters at a “Make America Great Again” rally in Greensville, North Carolina, Mr Trump ramped up his criticism of four congresswomen whom he controversially ordered to “go back” to the “totally broken and crime infested places from which they came” in a weekend tweet.

“These congresswomen are helping the rise of a militant, hard left,” Mr Trump said. “They never have anything good to say, which is why I say, ‘if they don’t like it, let them leave.’ ... They don’t love our country and in some cases I think they hate our country.”

But it was Ms Omar, a Somali-born member of Congress who moved to the United States when she was twelve, who was the main focus of his attack.

“Omar looks down with contempt on the hard-working Americans, saying that ignorance is pervasive in many parts of this country,” he said, adding that she has a history of “vicious anti-Semitic” comments.

His claims prompted cries of “send her back, send her back” from the crowd, a play on his 2016 campaign rally-cry “lock her up, lock her up,” a reference to his opponent Hillary Clinton.

Leaving the White House for the rally, he told reporters that he was “enjoying” the latest controversy over his comments which have drawn international condemnation.

“I’m enjoying it because I have to get the word out to the American people,” he said. He accused the four congresswoman of saying “horrible things”.

“If somebody else, or me, said something like that it would be historic. You should look at some of the horrible statements because there have never been statements like that,” he said.

But in a sign of the divisions besetting Democrats over how to respond to Mr Trump, an impeachment resolution brought to the House of Representatives, just as the president was leaving Washington, failed to garner sufficient support.

Texas congressman Al Green, a frequent critic of Mr Trump, filed articles of impeachment against the president, arguing that the president’s comments about four female members of Congress in a weekend tweet had “brought the high office of the president of the United States into contempt, ridicule, disgrace and disrepute.”

But in a sign of a split within the Democratic caucus, most Democrats voted to block the motion to proceed with a vote on Wednesday evening. 137 Democrats voted with Republicans to “table” — effectively kill – the resolution before it got to debate or a vote on the matter. But 95 Democrats voted against – a sign of the sizeable minority of Democrats, most from the liberal wing of the party, who are eager to move forward with impeachment proceedings against the president.

House speaker Nancy Pelosi has been struggling to maintain a cohesive stance on the issue of impeachment, and she herself has been wary of talking up impeachment, fearful that it could backfire on Democrats.

“We have six committees who are working on following the facts in terms of any abuse of power, obstruction of justice and the rest that the president may have engaged in,” she said. “That is the serious path that we are on — not that Mr. Green is not serious.”

The timing of the vote was particularly sensitive given that special counsel Robert Mueller is due to testify before two house committees next Wednesday, an appearance that is likely to reignite the debate over impeachment.

Separately on Wednesday, the House voted to hold attorney general William Barr and commerce secretary Wilbur Ross in contempt of Congress, for their failure to provide documents to congressional committees explaining the administration’s controversial question to add a citizenship question to the 2020 census.

Ultimately, the administration has abandoned the effort, after US Supreme Court ruling questioned the Trump team’s motives, but it led to suspicions that Republicans are seeking to redraw electoral districts in way that would be favourable to their party.

The 230-198 vote saw all Democrats vote to hold the two senior cabinet officials in contempt. While the vote is largely symbolic as the Justice Department is unlikely to pursue the case, it marks the latest escalation in tensions between the Democratically-controlled House of Representatives and the White House.

The vote to hold the two figures in contempt provoked a furious reaction from the White House, which dismissed it as “another lawless and reckless attempt to address the president and his administration”.

Mr Barr and Mr Ross had written to the House leadership earlier in the day, asking for the vote to be postponed, and claiming that a compromise could be reached. But the vote proceeded regardless.