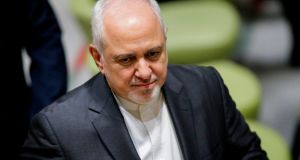 Iran’s Revolutionary Guards said it had seized a foreign vessel near the strategic Strait of Hormuz and detained its crew for allegedly smuggling fuel out of the Islamic republic.

The incident is the latest to impact shipping in the oil-rich Gulf and comes amid heightened tensions in the region as US sanctions have thwarted Iran’s ability to export oil.

The guards said the vessel was carrying a million litres of fuel, about half its capacity, but did not provide details about its identity or ownership. It was apprehended on Sunday south of Larak Island, which sits at one of the narrowest points of the Strait of Hormuz and is one of Iran’s main oil export points.

It was manned by 12 foreign crew, the guards said. But no shipping company or government has reported that one of its vessels has been seized.

Speaking in New York, Iranian foreign minister Mohammad Javad Zarif said the seizure – which he said occurred “about 10 days ago” – involved a “small tanker” and was part of the routine efforts to prevent smuggling of fuel products out of Iran.

The price of Brent crude hit its highest level of the day after the guards’ statement on Thursday. The international oil benchmark rose as much as 1.3 per cent to $64.46 a barrel following two consecutive sessions of declines.

The detained vessel was alleged to have been going to deliver smuggled fuel received from Iranian boats to foreign ships.

Iran’s foreign ministry on Tuesday said the Iranian navy had assisted a foreign ship that needed repairs. Those comments came amid reports that a Panamanian-flagged vessel, the MT Riah, had disappeared in the Gulf. It was not clear if the two incidents were connected.

Asked if there was any connection between the latest seized vessel and a UAE-based tanker a reference to the MT Riah – Mr Zarif said: “I don’t think there was a UAE tanker. I think most people made a big story.”

The UAE said this week that it neither owned nor operated the Riah, which has changed names and flags multiple times over the past 20 years.

Iranian officials have repeatedly threatened to disrupt the passage of oil and petrochemicals through the Strait of Hormuz if US sanctions prevent it from exporting crude.

This month, a British frigate intervened after Iranian forces tried to stop the passage of an oil tanker through the waterway. The attempt to impede that tanker, owned by BP, the energy group, was apparently in retaliation for the UK’s seizure of an Iranian vessel off the coast of Gibraltar this month because it was suspected of smuggling fuel to Syria in violation of EU sanctions.

The US and UK have also blamed Iran for sabotage attacks on six tankers off the coast of the UAE in May and June.

The British government said it was not “currently aware of any UK interests in this vessel”.

“We continue to urge the Iranian authorities to de-escalate the situation in the region,” a British spokesperson said. “The UK maintains a longstanding maritime presence in the Gulf. We are continuously monitoring the security situation there and are committed to maintaining freedom of navigation, in accordance with international law.”

Traders and analysts said the movement of smaller ships, such as the detained vessel and the MT Riah, were less rigorously monitored than large tankers.

“Small vessels are used to move oil to tankers in international waters. These tankers create fake documents about the origin of the oil,” said Anas Alhajji, an adviser to oil companies and oil-producing countries. “None of the above can be tracked and only field investigation can help.”

About a third of the world’s seaborne oil passes through the Strait of Hormuz. The US has said it hopes to create an alliance to provide maritime security in the Gulf.

Rear Admiral Ali Fadavi, deputy commander of the guards, kept up Iran’s war of words with the US on Thursday, saying that whenever American forces entered into the Gulf’s waters, “they say ‘we are in hell’.”

“The US will soon conclude that it is not to its benefit to stay in the region,” he said in a speech. “They have realised that there will be no victory for them in this fighting.” – Copyright The Financial Times Limited 2019