Turkish diplomat killed in attack in Kurdish territory in Iraq 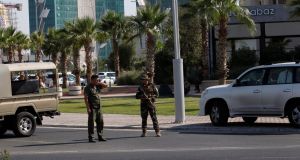 At least two people including a Turkish diplomat were shot dead on Wednesday in a rare attack in the capital of Iraq’s northern Kurdish region, local security officials and Turkey’s foreign ministry said.

A gunman opened fire at a restaurant in Irbil where Turkish diplomats were dining before fleeing in a car driven by an accomplice, two Kurdish security officials and a witness said.

There was no immediate claim of responsibility as security forces began a search for the attackers.

Turkey, Iraq’s central government in Baghdad and Kurdish authorities in Irbil condemned the attack, which took place weeks after Turkey launched a new military offensive against Kurdish separatist militants based in northern Iraq.

Ankara’s main enemy in Iraq is the PKK group, which has based fighters in the mountainous border region, north of Irbil, during its decades-long insurgency in southeastern Turkey.

Turkey and the ruling Kurdish party in Irbil, the KDP, have blamed the PKK for other Turkey-related incidents in northern Iraq including the storming of a Turkish military camp earlier this year.

Turkey’s foreign ministry said one of those killed on Wednesday was a diplomat working at its consulate to semi-autonomous Iraqi Kurdistan.

A statement from the Kurdish internal security service said two people were killed – the diplomat and another civilian – and one other person was wounded.

The Kurdish officials and Iraqi state television earlier said three people were killed and that they were all Turkish diplomats and included the deputy consul.

One witness said an attacker entered the restaurant and started shooting before he fled in a car that was waiting for him outside.

It was a rare major security incident in Irbil, where a new president and prime minister, part of a clan that has controlled the KDP for decades, recently took office. The KDP has said it will continue to co-operate closely with Ankara against the PKK.

“Nobody invited them [the PKK] here,” prime minister Masrour Barzani said in an interview with Reuters this month.

“We disapprove of their activities and ... of their presence here. We understand the concerns of the neighbouring countries about security issues,” he said, adding that Irbil would look to strengthen relations with Turkey.

Ankara’s forces have regularly carried out air raids against PKK targets in northern Iraq and in May dropped commandos on mountain ridges in a new operation against the militants.

Turkey has called for Baghdad to take a more active role in helping it eliminate the PKK, and has waged offensives in recent years against PKK allies in northern Syria. – Reuters