Speaking at a Conservative party hustings event in London, British prime ministerial candidate Boris Johnson has claimed that Mars bars and Christmas dinners will be unaffected in the event of a no-deal Brexit. 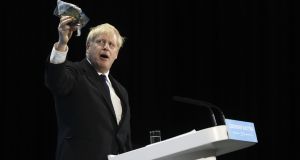 Boris Johnson holds a kipper in the air to make a false claim about EU regulations during a speech at the final Conservative Party leadership hustings, in London on Wednesday. Photograph: Simon Dawson/Bloomberg

The Tory leadership contender’s brandishing of a kipper during a speech in London on Wednesday night to lambaste unnecessary EU regulation was completely misplaced, an EU Commission spokeswoman said on Thursday.

Regulating the packaging of processed food, as opposed to fresh fish, is a matter for national governments, she pointed out.

Johnson had claimed EU rules meant kippers from an Isle of Man producer could not be posted out to consumers without a plastic ice pillow, an extra cost burden on smokers.

Using the plastic-wrapped kipper as a prop to attack both the EU and Brexiteers in Ukip, he told the crowd of Conservative members in the final leadership hustings debate: “We will bring the kippers back. It’s not a red herring.”

The kipper producer, he claimed, was “utterly furious” at the packaging costs imposed on him by the EU.

Old Brussels hands say the claim brought back not-so-fond memories of Johnson’s days in Brussels as a Daily Telegraph correspondent in the 1990s. Then he pioneered a new form of Eurosceptic journalism epitomised by usually false claimsm, such as that Brussels was setting rules for the curvature of bananas.

What Johnson did not admit to his supporters on Wednesday, however, is that the decision of the UK to leave the EU will bring a prohibition on the export into the EU of kippers, and all animal-based products such as meat and cheese, unless they emanate from certified producers.

Travellers determined to continue to enjoy their traditional British breakfast on holiday in Spain will find kippers packed in their luggage confiscated at Calais.