Trial over diet drug that led to deaths of ‘up to 2,000’ begins in France 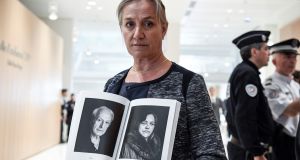 French pulmonologist Dr Irene Frachon with a photobook depicting portraits of ‘mediator victims’ as she arrives at court. Photograph: Getty

Servier is accused of knowingly marketing the appetite suppressant benfluorex, sold under the name Mediator, for years after it became apparent that the drug caused serious, often fatal, damage to the heart and lungs.

Fourteen persons and 11 legal entities, including the Servier laboratories and the French medicine agency ANSM, are also on trial. The ANSM is accused of negligence and inertia.

The French state is both officially accused and a civil plaintiff, along with 2,684 of the drug’s nearly 5,000 victims.

More than 100 witnesses have been summoned. The trial will comprise 110 sessions, spread over six to seven months.

The book that launched the scandal, Mediator 150 mg, How Many Dead? was published in 2010 by Dr Irène Frachon, a pulmonologist at the university hospital in Brest who noticed the link between the drug and valvulopathy or disorders of the valves of the heart.

Servier managed to have the subtitle of Frachon’s book suppressed.

The medicine agency said at least 500 people died from the effects of Mediator. Judiciary experts have estimated the number of deaths to be as high as 2,100.

“This court is not competent to say how many deaths Mediator caused, but to say the law,” said Judge Sylvie Daunis on Monday. She also noted that “this trial is opening 10 years, almost to the day, after the drug was suspended”.

Mediator victims often developed pulmonary arterial hypertension or PAH, which causes high blood pressure in the arteries that go from the heart to lungs. Victims experience difficulty breathing and intense fatigue and rarely live more than four years after diagnosis.

“It is undeniable that patients suffered undesirable effects linked to taking Mediator,” said Servier in a statement. “The Servier laboratories repeat their sincere regrets to patients touched by this tragedy and their families. They are the first concern of Servier laboratories which, from 2011, made a commitment to indemnify the victims, a process that has almost been completed today.”

Laurent Joffrin, the director of Libération newspaper, compared Frachon to the hero of a Frank Capra film who eventually prevails against the rich and powerful. Frachon became the heroine of La Fille de Brest, a feature film about the pulmonologist’s struggle to bring Servier to account.

Frachon told Ouest France newspaper of her relief that the trial has finally started. “It’s the moment of truth for Servier, who bogged down the justice system with delaying tactics . . . Unfortunately, since the first lawsuits were filed at the end of 2010, dozens of Mediator victims have passed away.”

How big a firm is Servier?

Servier employs 22,000 people worldwide and has a turnover of €4.2 billion. This correspondent interviewed Dr Jacques Servier, founder of the company, about its investments in Ireland in 2006. Servier had contracts with University College Dublin at the time and received grants from IDA Ireland.

Dr Servier spoke of the group’s plant in Arklow, Co Wicklow, which opened in 1989 and now employs 400 people, according to the company’s website. Servier Laboratories (Ireland) was established in Dún Laoghaire in 1974 and employs 40 people.

In his new year wishes in 2011, Dr Servier said “Mediator, it’s only three deaths”. He died in 2014 at the age of 92. Le Monde reported that Servier often entertained at the Cercle Hippocrate, a private restaurant next door to his mansion in Neuilly. He had staff draw up notes on politicians, personalities in the pharmaceutical milieu and officials from the medicine agency.

In the run-up to the trial, Servier said it has already paid €131.8 million to 3,732 Mediator victims, in exchange for their silence.

The French government created a public fund to compensate Mediator victims who were rejected by Servier or felt the amounts offered by the pharmaceutical company were insufficient. It has received 9,445 applications, three-quarters of them from women.

Pascale Saroléa-Boussinot died on March 8th, 2004, in Antibes at age 51. “I heard a noise upstairs and ran up,” her daughter Lisa Boussinot told France Television. “I found my mother gasping for breath, with pink and white foam coming out of her nose and mouth. My father called the fire department. She died a quarter of an hour later.”

The autopsy showed that Saroléa-Boussinot died from valvulopathy. Six years later, her family became the first to file a lawsuit against Servier. “We hope that Servier officials will be severely punished,” said Lisa Boussinot. “Maybe that will stop other laboratories hiding the ill-effects of drugs so they can make money.”