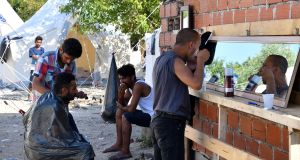 Migrant shave outside at the Vucjak migrants and refugees camp, in the outskirts of the city of Bihac, in Bosnia. Photograph: Elvis Barukcic

“This is jungle life,” says Wasim, a Pakistani who is among hundreds of migrants staying in a makeshift camp in northwestern Bosnia, from where they strike out at night in small groups for nearby Croatia and the European Union.

“We are all like animals here just trying to survive. It’s the worst sentence I could say, but unfortunately it’s true.”

The political science graduate from near Lahore speaks eloquently about how a famous son of the city, Pakistani prime minister Imran Khan, could transform life for his nation of 208 million and the quarter of its people who live in poverty.

Wasim (34) plans to return when times are better, but now he must hike again through the thickly wooded hills above the camp, try to slip past Croatian border guards who are accused of beating and robbing migrants, and find the hoped-for job somewhere in the EU that was his reason for leaving home last year.

Danger is all around: the squalid Vucjak camp is built on a former rubbish dump that may hold high levels of methane gas – prompting the UN’s International Organisation for Migration (IOM) to declare it unfit for human habitation – while the hills are infested with snakes and dotted with landmines from Bosnia’s 1992-1995 war.

There are no toilets for the more than 500 men who live here and washing facilities are rudimentary, increasing the risk of disease; fights are common, particularly after dark when police and local aid workers go home. A man was stabbed to death here last week during a fight between Pakistanis and Syrians.

“No one feels safe,” Wasim explains, as men who have fled conflict and poverty from North Africa to Afghanistan line up in the dust to receive food from the Bosnian Red Cross.

“Might is right here. Everyone pushes each other, everyone is desperate and wants to move on,” he says of this remote corner of Europe where he has been stuck for three months, having failed “four or five times” to enter the EU undetected.

“Everyone knows where to go. Even if they are illiterate, even if they didn’t go to school at all, they know Croatian and Slovenian and Italian cities by name. Everyone talks about this. Maybe they can’t even tell the time, but they know how to find locations with a mobile phone.”

The so-called Balkan route did not cross Bosnia in 2015, when more than one million refugees and migrants followed it from Turkey towards Germany and other EU states, where their arrival sent immigration to the top of the political agenda.

Even in 2017, Bosnia registered only 755 migrants but, as the route shifted to bypass tighter border controls elsewhere in the Balkans, that number soared to 25,000 in 2018 – and 20,000 migrants have entered the country so far this year.

They keep coming this way because it works – only about 6,500 of those people are still in Bosnia – but as months of cold, wet and snowy weather approach, up to 2,000 people are living rough at Vucjak and in parks, woods and derelict buildings in the border towns of Bihac and Velika Kladusa.

“We’ve been warning since January of the need to increase the number of official migrant centres or their capacity . . . but there was no political decision to expand accommodation, even though international funding is available,” says Peter Van der Auweraert, the IOM representative in Bosnia.

“Winter is just around the corner and any new location takes time to establish. We now have about 4,200 beds for migrants around the country, but we need about 2,000 more,” he told The Irish Times.

“Vucjak is a disaster and it would be a bigger disaster if it’s still open in winter . . . If we don’t act now we will have people sleeping outside in Vucjak and other totally unacceptable places and we will be facing a threat to human life.”

Yet Bosnian political leaders at all levels are unwilling to take any steps that rivals could portray as an “invitation” to migrants, or which would acknowledge the fact that they are likely to keep coming to the country for the foreseeable future.

The local authorities in Bihac transported people to Vucjak despite objections from international aid groups, moving them from the city’s streets and parks to the edge of the forest – “the jungle” to migrants – which leads to Croatia.

National politics is meanwhile paralysed, not for the first time under Bosnia’s fiendishly complex post-war system, as parties representing its Bosniak Muslim, Serb and Croat communities have yet to form a government nearly a year after elections.

“This is ‘Absurdistan’,” declares Ale Siljdedic, police spokesman for Una-Sana canton, in his office in Bihac.

“The problem is that no one cares in this country. They don’t care for local people, never mind the migrants. What is 5,000 migrants for a whole country if everyone shares them around? It’s nothing. But for a city of 50,000 like Bihac it’s too much.”

The Pakistani stabbed at Vucjak last week was the second man to die in fights between migrants in Bihac. There have been a couple of mass brawls, but most of the cases he sees relate to minor thefts, particularly of phones and clothes, and break-ins at empty houses near the border where migrants sleep and then move on.

“If you don’t have something to eat and you’re hungry you will go inside somewhere and get it. If it’s freezing cold and you could be dead the next morning then you’ll go into a house or abandoned building to sleep,” Mr Siljdedic says.

“Maybe we’ll find you dead with two friends as happened last year, when they made a fire and it spread everywhere and they were killed. We’ve had 20 dead migrants in the last two years: two murdered, six drowned, three burned, some car accidents and a train hit one guy. This is the life we have here – people are coming and going and some die.

“Camp Vucjak is not good and it will be much worse in winter. When the rain and snow come – and it can be minus 20 with two metres of snow up there – what will happen to those guys? They’ll come to Bihac and come into contact with locals and make some shit. And then we’ll have to deal with them.”

Many migrants see the next few weeks as their last chance to reach the EU this year, creating a likely increase in movement towards Croatia, where officials deny claims that border guards beat and rob people that they push back into Bosnia.

“With winter coming [migrants] are increasingly on edge and they feel like it’s ‘now or never’ to get across the border. At the same, the border guards in Croatia seem to be pushing people back more aggressively than before,” says Nihal Osman, deputy field co-ordinator in Bosnia and Serbia for Médecins Sans Frontières.

“There’s been a noticeable increase of alleged push-back injuries in the last week or so, including people with broken bones and dog bites.”

Sitting in a wheelchair in an IOM-run camp near Bihac, Amir Ali Mohammad Labaf accuses Croatian border guards of dumping him in the forest near the frontier just days after he suffered back injuries when he fell down a roadside embankment.

Labaf says he was persecuted in Iran as an activist from the Gonabadi dervish order, a major Sufi sect that is denounced by country’s Shia theocracy; news reports from 2008 say a court in Qom sentenced a member of the sect with the same name to five years in jail, 74 lashes and internal exile for “spreading lies”.

“I was in hospital for a day in Croatia and asked for asylum. They said no and deported me to the jungle,” says Labaf (40), referring to the forest that spans the border. “I want to go to France, but I can only walk a little and with great pain.”

At Vucjak, meanwhile, Wasim is ready for another round of what migrants call “the game”.

“I don’t have money to pay smugglers so I will try by myself to cross the border. I have some knowledge of the stars so I can travel by night,” he says. “You just have to try and try and try. And when you succeed, then you know it was the right time.”