Houthi rebels call for end to Saudi bombing in Yemen 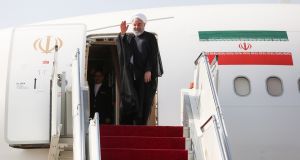 Yemen’s Houthi rebels and Iran have seized the political initiative ahead of debates in the UN General Assembly on Tuesday in New York. The Houthis have called for an end to Saudi bombing of their country in exchange for a halt on all missile and drone attacks on Saudi Arabia. Iranian president Hassan Rouhani has announced he will propose a local security plan to end tensions in the Gulf.

The Houthi call, welcomed by the United Nations, was issued a week after rebel-claimed drone and cruise missile strikes on key Saudi oil installations cut 60 per cent of the country’s oil production. Saudi officials report that repairs could take up to eight months.

The US, Saudi Arabia and their allies blame Iran for, at a minimum, providing weaponry for the damaging strikes on the Saudi oil facilities, while the Houthis continue to claim responsibility. They argue that “freedom-seeking people within the kingdom” were involved in the operation. Among them could be Yemenis resident in Saudi Arabia, or Saudis – either persecuted Shias or disaffected Sunnis.

During his address in New York, Mr Rouhani will warn that the presence of foreign forces destabilises the region and urge Iran’s neighbours to join an indigenous security effort to safeguard the Persian Gulf, Strait of Hormuz and Gulf of Oman. Although the Iranian proposal, certain to be rejected by Washington, is meant to counter the US-led, largely western coalition of maritime forces already operating in this region, Tehran does not rule out participation by the five permanent UN Security Council members.

While in New York, Mr Rouhani is set to meet French president Emmanuel Macron, British prime minister Boris Johnson and his Japanese counterpart Shinzo Abe, but not US president Donald Trump. Iran insists Washington must lift sanctions before there can be talks with the US.

To ease tensions in the Gulf, Tehran has released a British-flagged oil tanker detained by Iran since July in retaliation for Britain’s seizure of an Iranian vessel, which was freed in August.

Iran, Saudi Arabia and the US say they want a diplomatic solution to the Gulf crisis but have warned they would retaliate against any attack with military action, risking a devastating all-out war. Iran’s adversaries hesitate to use force, however, partly because Iran has the deterrent advantage: the attack on Saudi oil facilities demonstrates that major punishment can be inflicted on highly vulnerable targets.

Iran’s deterrent advantage has come about because Tehran has adopted a defensive/offensive military strategy since the Iran-Iraq war (1980-88). Iran has developed and manufactured most of its weaponry, bought Russia’s S-300 missile defence system, and trained troops to use its equipment. Instead of formulating a clear strategy, the Saudis have accumulated vast arsenals for an army which does not fight and depends on US protection.

Following the latest missile strikes, the US promised to send several hundred troops and Patriot missiles, which have failed to defend Saudi Arabia from low-flying missiles. The Saudis have been urged by Russia to buy its S-400 anti-missile equipment, which is said to be more effective than the US Patriots in defending against drone and cruise strikes as well as ballistic missile attacks.

The Houthis demand an end to the Saudi-led war on their country. Tehran is using the current tension to put pressure on Europe and the US to end US-imposed sanctions on Iran’s struggling economy and return to the terms of the 2015 nuclear deal.

The US has violated the agreement by withdrawing and reimposing sanctions and Europe by failing to lift them, prompting Iran to renege on provisions limiting its nuclear programme.