Time’s up for Leopold II, Belgium’s butcher of the Congo

A statue of King Leopold II in Tervuren, near Brussels that was damaged during protests inspired by the death of George Floyd has been removed for renovation. In Belgium, the number of people campaigning to remove public figures of him is growing. 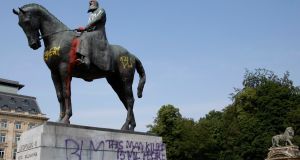 A statue of Belgium’s King Leopold II is smeared with red paint and graffiti in Brussels on Wednesday. With protests sweeping the world in the wake of the killing of George Floyd in Minneapolis, Leopold is increasingly seen as a stain on the nation. Photograph: Virginia Mayo/AP

The statues are falling. With each day that passes, another statue of Belgian king Leopold II is hauled from its pedestal by authorities and taken away.

They became a target as Black Lives Matter protests swept the world: burned, defaced, and splashed with red paint. Their removal is pre-emptive. It’s said, perhaps to reassure those offended by their removal, that the statues are being restored, and kept in a safe place.

It’s hard to imagine they could ever return. What were they doing there in the first place?

Even in his own time, Leopold II was viewed as a monster. In 1885, he used the pretence of a scientific and humanitarian initiative to seize a vast part of Africa 80 times the size of Belgium. It was a private colony, under his personal rule. It was renowned for grotesque cruelty, and it made him very rich. The cliche was that guns and chains went in, and rubber and ivory came out.

Vivid scenes of the torture, mutilation and slaughter of the unfortunate inhabitants of the royal colony as they were forced to harvest rubber for the king and his subcontractors were captured by the Sandycove native Roger Casement. In 1903 he was working in the British diplomatic service, and was given the assignment of investigating the alarming reports issuing from the colony.

Here is one testimony he collected, from a local child with the initials “U. U.”

“When we were going on the way they killed ten children because they were very, very small; they killed them in the water. Then they killed a lot of people, and they cut off their hands and put them into baskets and took them to the white man. He counted out the hands – 200 in all,” the testimony reads.

“The soldiers saw a little child, and when they went to kill it the child laughed so the soldier took the butt of the gun and struck the child with it, and then cut off its head. One day they killed my half-sister and cut off her head, hands, and feet because she had on rings.”

On his return from Africa, Casement began his evolution from servant of empire to Irish nationalist. He joined the Gaelic League, then Sinn Féin, then began smuggling guns into Ireland, and was hanged as a traitor in London following the Easter Rising of 1916.

Nowhere does it say we killed 10 million Congolese, that we cut off men and women’s hands to build Belgium

The number of people who died under Leopold’s rule in the Congo is estimated to be about 10 million. Nevertheless, in Belgium, some still see Leopold II as a national hero, who worked to further the power and glory of his small European state. Statues of him abound: in the centre of Brussels, he sits astride a horse in a heroic pose, above the inscription “patria memor” (the homeland remembers).

Joëlle Sambi Nzeba, a Brussels local who is Congolese-Belgian, told me what walking past the statue is like. “What I see when I walk in the city are the stains, the mark of the domination,” she said.

“There are symbols of Leopold II everywhere. There are over 100 streets and bus stops that are named after men who took part in the colonisation of the Congo. Nowhere does it say we killed 10 million Congolese, that we cut off men and women’s hands to build Belgium.”

Sambi Nzeba is part of the Belgian Network for Black Lives, a group of mostly women of African descent that has been part of anti-racism protests. They are campaigning for recognition not just of the past, but of how it has shaped the present.

“It’s not a single man, it’s about a system, and the situation perpetuates today,” she told me. “Why does Congo still have a debt to pay? Let’s talk about that. Why can’t people of Congolese descent here in Belgium get proper housing, proper jobs? Why aren’t we represented in the media?

“In this lockdown, this Covid, our mothers and sisters and aunts are the ones, like the nurses in the hospitals, on the frontline,” she added. “Those majority of people who sweep the streets are certainly not white people.”

The subjugation of the Congo did not end when, to quell international embarrassment, Leopold was forced to give his colony to the Belgian state in 1908. It remained a Belgian colony until 1960. The Congolese hero of independence, Patrice Lumumba, became its first democratically elected prime minister, but he was removed from office and executed not long after by Belgian-led troops. The soldiers dissolved his body, but took some of his teeth as souvenirs.

What followed for the Congo were cycles of war and looting; it continued paying debt to Belgium. Today, despite its vast natural resources of cobalt, copper, diamond, tantalum, tin and gold, the Democratic Republic of the Congo is one of the world’s poorest nations, still deeply indebted to international creditors, and 72 per cent of its people live on less than $1.90 a day.