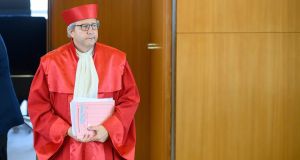 The chairman of the German constitutional court Andreas Vosskuhle gives out the court’s ruling that the ECB must clarify a key bond-buying scheme, in Karlsruhe. Photograph: Sebastian Gollnow/AFP via Getty Images

A ruling by Germany’s constitutional court has sparked serious fears of the unravelling of the European Union.

It’s a delayed judgment from an old fight that has hit the EU at its most vulnerable. A group of German academics, including a former leader of the far-right party Alternative für Deutschland, Bernd Lucke, took a case in 2015 to challenge the bond-buying programme of the European Central Bank (ECB).

They hardly hoped to win, but thought they could make a political point. During the euro zone crisis, as now, the ECB was buying the debt of economically weaker EU countries to bid down their borrowing costs and rescue them from the threat of a debt spiral, and directing national central banks to do likewise.

This is an emergency measure taken to hold the euro zone together when its economic imbalances threaten to tear it apart, but it has long been hated by German conservatives who believe it harms savers and pension funds.

Last week, the German constitutional court unexpectedly sided with them. It ruled that the ECB failed to conduct a “proportionality” analysis of the effect of its bond-buying policies on “public debt, personal savings, pension and retirement schemes, real estate prices and the keeping afloat of economically unviable companies”.

In a pithy 110-page judgment, the court ordered the German central bank to stop buying bonds if the ECB failed to produce such an assessment within three months. This immediately raised fears it could jeopardise current bond-buying efforts, and cause a run on Italian debt.

This is perilous to the euro zone, but not as damaging to the EU as another part of the ruling, which has tugged at a thread that some fear may lead to the unravelling of its very order.

This is contrary to the concept of the primacy of EU law. Under this precept, if laws of a member state are in conflict with EU law, EU law takes precedence, and the ECJ is the final authority to adjudicate on it. For the European Commission, agreeing to this is what it means to be a member state.

“The case goes to the very heart, to the very basis of the European Union,” an EU official said.

“The union is based on uniform interpretation and application of law,” he added. “Otherwise we have no union.”

The German court managed to make such a ruling because it “slipped through the door of attributed competence”, according to the official. This refers to the fact that the governments of member states grant EU institutions some powers, while retaining others for themselves.

The court deemed it had the authority to rule because the ECJ had strayed out of its jurisdiction into an arena of national power. This is contrary to EU treaties, which hold that the ECJ is the arbiter of EU law, including on determining where the boundaries of EU institutional powers lie.

The EU is weighing its options, and will observe the reaction of the German government as it assesses whether it can go after it for infringing EU law.

But a knot of fundamental principles binds the ability of both Brussels and Berlin to respond.

According to the principle of judicial independence, the German government is powerless to interfere with the judgment of the court.

While the Republic has amended its Constitution several times to adapt it to EU law, the German conundrum cannot be fixed this way. It is grounded in the German constitution’s “eternity clause”. Adopted after the second World War to ensure there could never again be a dictatorship, the clause guarantees certain fundamental principles and can never be amended.

The German constitutional court is highly influential in the region. Its ruling was music to the ears of EU critics in Poland and Hungary.

These countries are already battling judgments from the ECJ, which has found against them for interfering with the independence of their courts. Following the German precedent, their courts can simply deem that the ECJ has overstepped its powers, and can thus be ignored.

The EU is not a state, and has no army, or national guard. Its enforcement powers are limited. Its legal order relies on the voluntary compliance of member states and their courts.

“If national courts stop co-operating the whole system grinds to a halt,” said Ronan McCrea, professor of constitutional and European law at University College London. “Member states have been upholding it all for 40 years. Maybe we became complacent about how weak the system to ensure that is.”