Chaos at US primaries casts doubt over readiness for November election 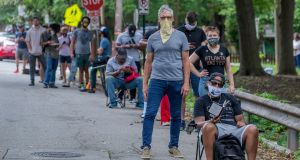 Concerns have been raised about the preparedness of US authorities for November’s presidential election, after chaotic scenes unfolded at some voting locations across the country on Tuesday.

Several states, including West Virginia, Nevada and Georgia, held primary contests for November’s presidential and congressional elections – a key stage in the electoral process where Democrat and Republican voters choose who will run for the party in November.

But the voting process on Tuesday was marred by broken machines and long queues as many voters struggled to cast their ballots.

In Georgia, a Republican-leaning state that is increasingly viewed as a swing-state by Democrats hoping to capitalise on anti-Trump sentiment, queues of up to six hours were reported, particularly in the greater Atlanta area.

Voters were forced to line up in sweltering heat outside voting booths, as Fulton County officials struggled to work machines, some officials did not show up for work and some sites ran out of back-up paper ballots.

Many of those who had come to vote had not received absentee ballots, which would have allowed them to vote by post – increasingly a favoured option for voters in the US this year given the coronavirus pandemic.

Polling booths extended their opening hours to cope with the backlog of voters. In Georgia – where voter suppression emerged as a key political issue in 2018 after gubernatorial candidate Stacey Abrams narrowly lost the race to Brian Kemp – the problems unfolded in areas with large non-white communities.

In a separate development, the Republican National Committee looked set to move this summer’s convention to Jacksonville, Florida, following a feud between US president Donald Trump and North Carolina’s Democratic governor Roy Cooper. The Republican Party had been scheduled to hold its late-August convention in Charlotte, but Mr Cooper has been unable to guarantee that the gathering can take place as planned due to Covid-19 social distancing restrictions.

While some events may take place in the North Carolina city, the bulk of the activities are likely to occur in Jacksonville, one of several cities visited by Republican officials in recent days. Florida, with its 29 electoral college votes, is likely to be a key battleground in the presidential election.