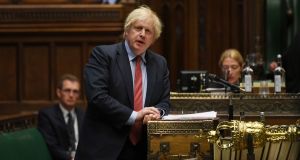 Wednesday’s Downing Street press conference should have been a good news moment for Boris Johnson as he announced a loosening of social-distancing rules that will make lockdown life much easier for millions of people.

But the news that single-adult households could form “support bubbles” with other households was blown away by Neil Ferguson’s assertion a couple of hours earlier that the UK’s death toll from coronavirus could have been halved if lockdown had been introduced a week earlier.

Conservative critics of the lockdown blame Ferguson’s modelling for persuading Johnson that a quarter of a million people could die if he did not introduce strict measures in late March. And Downing Street cheerfully threw the scientist under the bus when he broke lockdown to meet a lover, in sharp contrast to Johnson’s determination to defend Dominic Cummings’s multiple lockdown breaches.

In his evidence to the House of Commons science committee, Ferguson also highlighted the UK’s lack of testing early in the epidemic and its failure to protect nursing home residents.

“The key things to determine number of deaths is at what point in your local epidemic you trigger interventions – how far in are you when you shut down transmission. And we frankly had underestimated how far into the epidemic this country was, that’s half the reason,” he said.

“The second part, which I think would have been more avoidable, is about half of those deaths occurred in care homes ... And we did all this working under the assumption which was government policy at the time that care homes would be shielded from infection.”

Ferguson’s evidence followed another stumbling performance by Johnson during prime minister’s questions, when he snapped at Labour leader Keir Starmer for drawing attention to the government’s shambolic attempt to reopen schools before the summer break. Johnson admitted on Wednesday that most children would not now return to school before September – and that is a target rather than a commitment.

The prime minister pointed out that some other European countries, including Ireland, were keeping schools closed until September. Left unsaid was that, unlike the UK, most other countries made a decision about schools weeks ago and stuck to it.

Johnson’s failure to deliver on his promise on schools and the slow pace of exiting lockdown have fuelled fears on the Conservative backbenches that the UK could suffer the worst economic outcome as well as the worst health outcome from coronavirus in Europe. The public are taking notice, too, and YouGov shows popular approval of the government’s handling of the crisis has fallen by 20 percentage points since the start of the lockdown.