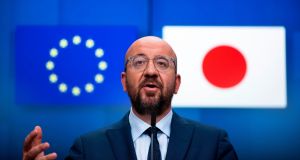 Little noticed perhaps this week was a meeting between the Japanese prime minister Shinzo Abe and the leaders of the European Union. It took place as all such meetings do in the current times by video conference. But this did not detract from its substance.

After their hour-long discussion the two sides released a lengthy joint statement, published the websites of both the European Commission and Japanese foreign ministry.

It didn’t mention either the United States or China. But they were nevertheless present throughout what amounted to a defence of a weakening world order as the two powers engage in a geopolitical tug-of-war amid the pandemic.

It began by expressing sympathy to the victims of Covid-19, and stating that the two sides “recognised that global solidarity, co-operation and effective multilateralism are required more than ever to defeat the virus as well as to ensure economic recovery”.

The statement of commitment to multilateralism – to international alliances and co-operation to achieve common goals – is a response to the retreat by the United States under the Trump administration from the norms that defined the second half of the 20th century.

Trump’s time in office has been defined by his disparagement of international organisations from Nato to the World Health Organisation, and abrupt withdrawals from the Iran deal and Paris climate accord. This has left the EU unmoored, and in a search for new friends in the world, after decades of relying on the US as an ally and enforcer.

The EU-Japan statement touched on how this has played out in the pandemic. “The leaders reaffirmed the role of the WHO in co-ordinating the fight against the Covid-19 pandemic,” it said, in a clear a riposte to Trump’s threats to pull the US out of the WHO and to revoke funding, over what he says is its domination by China.

Japan itself is not wholly happy with the WHO’s response to coronavirus, and has called for it to be investigated. In a nod to this, the EU joined Tokyo in the statement in calling for the WHO to perform an “impartial, independent and comprehensive evaluation to review experience gained and lessons learnt”.

When the EU held a pledging event to raise money for the search for a vaccine this month, the US noticeably declined to take part. Japan pledged more than €730 million. The event was part of a campaign by the EU to ensure that if and when a vaccine is developed, global powers agree to distribute it equitably rather than competing for access.

This is in no small part a response to alarm in Brussels to indications that Washington intended to do just that, first raised in March, when Germany reported the Trump administration had made secret overtures offering large sums of money for exclusive access to a vaccine in development by Tübingen-based company CureVac.

Any medicines or vaccines should be developed through “global collaboration and sustained funding” so that they are made “available to all at an affordable price” read the joint EU-Japan statement. It called for any future Covid-19 vaccine “to become a global common good”.

Since the Trump administration took office it has hamstrung the functioning of another international body, the World Trade Organization, by blocking appointments to its appellate body to disable its ability to rule on disputes.

In an effort led by trade commissioner Phil Hogan, Brussels has been attempting to get around this by building workarounds to this obstruction. The statement reflected the EU;s efforts to court Tokyo as an ally: the two committed to “work together to reform and strengthen the WTO”.

But the frankest statement of all came near the end of the statement. It was aimed at disinformation, in a reflection of how the basic facts about the pandemic and the disease have been abused by states for propaganda purposes. Trump has taken aim at Beijing by dubbing it the “China virus”, while Chinese officials have spread conspiracy theories about the pandemic’s origin, suggesting it came from the United States.

“The leaders also discussed the geopolitical situation in the light of the Covid-19 pandemic. They reiterated their commitment to upholding the rules-based international order,” the statement read.

“They confirmed that access to transparent, timely, reliable and fact-based information is crucial for an effective global response to the pandemic. It constitutes the foundation of good governance and reinforces the resilience of our societies and democracies. The leaders confirmed their resolve to counter disinformation, in accordance with shared principles such as freedom of expression and the rule of law.”

Not long ago, concepts such as the rule-based international order and fact-based information did not need such defending. The statement reveals a world in which their guardians are increasingly isolated.