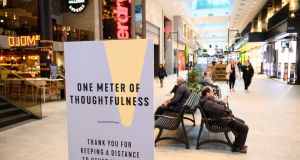 A sign advising visitors to social distance at a shopping centre in Stockholm, Sweden. Photograph: by Henrik Montgomery/AFP via Getty

In the late 1700s readers of novels in the English language were gripped by a series of suspenseful tales set in Italy.

They were typically set in crumbling castles and featured heroines persecuted and pursued by devious Italian nobles. Their setting in a Catholic land, against a backdrop of warrenous monasteries and casts of cloistered nuns and sinner priests, lent them an exotic and sinister atmosphere that enthralled readers, and created the genre of Gothic fiction.

The author of these 18th century best-sellers – A Sicilian Romance, The Mysteries of Udolpho, The Italian – was a housewife living in London.

Ann Radcliffe had never been to Italy. The place she wrote about existed only in her imagination. But her idea of Italy – decadent, thrilling and threatening – was convincing to readers as a place where their wildest fears and fantasies could play out.

Sweden appears to play a similar role in the popular imagination of 2020.

Before the pandemic, the Scandinavian country was an obsession of the international anti-immigration right. Gritty urban tales from Malmo and Stockholm were mined as content for right-wing websites and social media networks around the world.

Florid stories about Sweden featuring violence and sexual assault – and sometimes bacon – became a genre of their own. Whole concepts, such as the idea of “no-go zones”, in which immigrants are supposed to have taken control to the exclusion of national police forces, became common parlance, despite the concept not being recognised within Sweden itself.

Sweden became the setting for a kind of morality tale about immigration, and what happens to liberal western countries that succumb to its dastardly effects.

In a strange reversal, Sweden’s response to the coronavirus made it the focus of envy.

The country did not close schools and businesses to curb the spread of the virus. This led to Sweden being adopted internationally as the darling of lockdown opponents. Peculiarly, people of a laissez-faire and pro-business persuasion took up the Scandinavian welfare state as a bastion of personal freedom and sound economic policy.

They saw in Sweden what they wished to see: an argument that society could continue as they knew it, and that their behaviour did not need to change. They used it to argue against lockdown policies as unnecessary, and to shift the blame for economic turmoil on to the policy response to the disease, and away from the pandemic itself.

In recent days the Financial Times, Bloomberg, Politico, the Wall Street Journal and numerous others have reported that Sweden is facing a comparable economic downturn to the rest of Europe despite its lighter pandemic restrictions. Its central bank forecasts a downturn of 7-10 per cent and unemployment as high as 10.4 per cent.

But this narrative would make sense only to a non-Swedish audience.

Within Sweden, the national pandemic policy was never justified with an economic rationale. It was designed by the country’s public health agency, which has no role in setting economic policy. The idea of it as an individualistic, pro-business policy was a creation of foreigners drastically misreading Sweden from abroad.

Authorities in Sweden actually argued that top-down measures such as closing businesses and schools were not necessary because Swedes could be relied on to do what they were told. To follow the government’s advice. To work from home if possible, to wash their hands frequently, to stay distant from others, to not form crowds.

“They’re not wedded to this idea of personal freedom,” said Philip O’Connor, an Irish journalist based in Stockholm. “Individual responsibility means obeying the state.”

No clear morality tales can yet be told about the approach of one country to the pandemic versus another.

But national mythologising has been pervasive, both towards other countries, and in conjuring up calming stories about why one’s own citizens need not be alarmed.

Early in the pandemic, it was common to read in Dutch media that the Netherlands was too sensible to be badly affected by the virus. The fate of Italy would not befall the Netherlands, philosopher Marli Huijer told an interviewer in March, because the Dutch are “disciplined citizens” who “often wash their hands”.

This kind of exceptionalism was also notable in the United Kingdom, where evocations of the defiant spirit of the Blitz were ubiquitous despite being irrelevant, and in the context of an indifferent infectious virus, perhaps actively harmful.

Ideas about national character also impeded the learning of lessons where they were available. The experiences of Asian countries, from Hong Kong to Taiwan, were largely ignored, despite the fact that the people there had already fought this virus and in many cases prevailed.

Instead of enjoying the fruits of their learning, western countries insisted on wastefully reinventing the wheel, apparently convinced that whatever was needed here, it could not possibly be the same as what had already worked so far away, in those places imagined to be so very different.