Annexation would be incompatible with international law, Maas warns 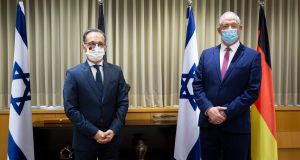 German foreign minister Heiko Maas told Israeli leaders on Wednesday that Berlin opposes the plan to annex areas of the occupied West Bank as early as next month.

He warned that annexation would be incompatible with international law and make a two-state solution impossible.

“I will continue ... to reiterate the German position and explain our serious and honest worries as a very special friend of Israel about the possible consequences of such a move,” he said.

“We share these views with our European partners, and we are of the view that annexation does not go together with international law. We continue to stand for an agreed-upon two-state solution.”

Mr Maas did not say what Germany, which takes over the rotating presidency of the European Union on July 1st, will do if Israel goes ahead with its annexation plan but reportedly warned that other EU countries could apply sanctions and recognise a Palestinian state in response.

Israeli prime minister Binyamin Netanyahu has stated his intention to pursue unilateral annexation in the coming months based on the US Middle East peace plan, dubbed the deal of the century, which was released in January.

According to a map contained in the peace plan, Israel can extend sovereignty to the Jordan Valley and most settlements, covering about 30 per cent of the West Bank.

Israeli foreign minister Gabi Ashkenazi said Israel would listen to the opinions of Germany, the US, the Arab world and the international community but he expected Berlin to wait for Israel’s final decision before they decide how to respond. He stressed that detailed annexation maps still hadn’t been drawn up.

According to unconfirmed Israeli media reports, due to concern over Jordan’s fierce opposition, Israel may now drop the plan to annex the Jordan Valley and limit the extension of sovereignty to three main settlement blocs: Ariel, Ma’ale Adumim near Jerusalem and the Etzion bloc, south of Bethlehem.

In a surprise development, some of the leaders of the settlement movement have spoken against the annexation, fearing it will pave the way for the creation of an independent Palestinian state in 70 per cent of the West Bank.

Senior Palestinian authority official Saeb Erekat warned on Wednesday that Israeli annexation would lead to “disaster” and compared Israel to an empire whose actions would lead to its own collapse. “What Binyamin Netanyahu is doing is putting Palestinians and Israelis in the path of conflict,” he said.

In a separate development, Israel’s high court has ruled illegal a law that permitted the state to take control of private Palestinian land if compensation was paid to the owners. The move prompted calls by right-wing legislators for a bill that would allow the Knesset to override court rulings.