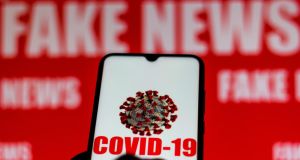 Chinese officials have openly promoted a conspiracy theory that the coronavirus originated in the United States. Photo illustration: Rafael Henrique/SOPA Images/LightRocket via Getty

The European Union has accused Russia and China of running large-scale disinformation campaigns targeting EU citizens, resulting in a “huge wave” of false information about the coronavirus pandemic.

The spread of the virus has “been accompanied by a massive wave of false or misleading information, including attempts by foreign actors to influence EU citizens and debates”, the European Commission wrote in a report on Wednesday.

“Foreign actors and certain third countries, in particular Russia and China, have engaged in targeted influence operations and disinformation campaigns in the EU, its neighbourhood and globally,” it stated.

It was the first time the EU’s executive body named China as a source of disinformation. In recent months the EU’s diplomatic service has been struggling to deal with an increasingly aggressive Beijing, which it sees as having sought to exploit the pandemic for propaganda purposes.

The report also included an indirect criticism of US president Donald Trump, who floated the idea of using bleach as a medical treatment for the disease.

The report presented disinformation as a threat both to democracy and the health of citizens. According to one study, the commission noted, willingness to take up a vaccination in Germany decreased by almost a fifth in less than two months amid a blizzard of dubious scare stories.

The EU’s diplomatic service recorded more than 550 disinformation narratives from pro-Kremlin sources, and found evidence of a “co-ordinated push” by Chinese sources to promote its response to the pandemic and deflect blame.

Chinese officials have openly promoted a conspiracy theory that the coronavirus originated in the United States, part of a stand-off with Washington, where Mr Trump has dubbed the disease the “Chinese virus”.

Beijing has used sales of medical equipment and aid to bolster its image after being blamed for the spread of the virus due to perceived failures at the time of its outbreak.

In France the Chinese ambassador was summoned in April due to outrage over posts published on the embassy website claiming elderly people in that country had been abandoned to starve to death and that French parliamentarians had used a slur against the head of the World Health Organisation, Dr Tedros Adhanom Ghebreyesus.

“I believe if we have evidence we should not shy away from naming and shaming,” said Vera Jourová, a European commission vice-president. “What we also witnessed is a surge in narratives undermining our democracies and in effect our response to the crisis. For example the claim there are secret US biological laboratories on former Soviet republics has been spread by both pro-Kremlin outlets, as well as Chinese officials and state media,” she said.

The commission has increased pressure on social media platforms including Facebook and Twitter to stop the spread of misinformation on their platforms as it begins a public consultation on how to update regulations on internet companies that could make platforms take more responsibilty for content.

Google, Twitter and Facebook have already signed up to a code of conduct produced by the commission on disinformation. Tiktok, which is owned by the Beijing-based company ByteDance, also plans to commit to the code, and negotiations are ongoing with Facebook’s encrypted messaging service WhatsApp.

1 All third level colleges moved to Level 3, most tuition moved online
2 Stove and open fire burning should be banned, says EPA
3 Covid-19: Taoiseach warns of restrictions in cities as hospital cases pass 100
4 People asked not to cross Border as Donegal prepares for Level 3 restrictions
5 How Finland kept Covid-19 in check and protected its economy
Real news has value SUBSCRIBE