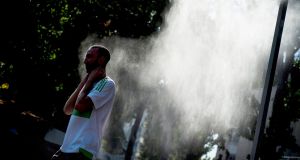 People cool down along the canal de l’Ourcq in Paris on Wednesday. Photograph: Julien de Rosa/EPA

The Netherlands and Belgium recorded their highest ever temperatures as the second extreme heatwave in consecutive months to be linked by scientists to the climate emergency advances across the continent.

The Dutch meteorological service, KNMI, said the temperature reached 38.8 degrees at Gilze-Rijen airbase near the southern city of Tilburg at 3pm on Wednesday, exceeding the previous high of 38.6 degrees set in August 1944.

Further north, the temperature in Belgium struck 39.9 degrees, smashing the country’s previous high of 36.6 in June 1947 in records dating back to 1833, according to David Dehenauw, the head of forecasting at the Royal Meteorological Institute.

“The most extreme heat will build from central and northern France into Belgium, the Netherlands and far-western Germany into Thursday,” said Eric Leister of the forecasting group AccuWeather, with new all-time highs possible in Germany and Luxembourg.

After several cities in France broke all previous temperature records on Tuesday, including Bordeaux, which hit 41.2 degrees, the national weather service, Météo France, said Paris was likely to beat its all-time high of 40.4 degrees, set in July 1947, on Thursday with 42 degrees.

Southern and eastern England are said to have a 70 per cent chance of an unprecedented 39 degrees on Thursday, which would beat the UK’s July record of 36.7 degrees and all-time high of 38.5 degrees, recorded in 2003.

City records in Amsterdam and Brussels are also expected to fall.

Cities are particularly vulnerable in heatwaves because of a phenomenon known as the urban heat island, in which concrete buildings and asphalt roads absorb heat during the day and emit it at again night, preventing the city from cooling.

The latest heatwave, caused by an “omega block” – a high-pressure pattern that blocks and diverts the jet stream, allowing a mass of hot air to flow up from northern Africa and the Iberian peninsula – follows a similar extreme weather event last month that made it the hottest June on record.

The highest ever June temperatures were recorded in the Czech Republic, Slovakia, Austria, Andorra, Luxembourg, Poland and Germany, while France registered a record high of 45.9 degrees in the southern commune of Gallargues-le-Montueux.

The June 26th-28th heatwave in France was 4 degrees hotter than a June heatwave would have been in 1900, according to World Weather Attribution, a new international programme helping the scientific community to analyse the possible influence of climate change on extreme weather events.

A study published earlier this year by the Swiss Federal Institute of Technology in Zürich said last year’s summer heatwave across northern Europe would have been “statistically impossible” without climate change driven by human activity.

The Dutch KNMI weather service has has issued a code orange extreme temperature warning for everywhere except the offshore Wadden Islands and implemented its “national heat emergency” plan, while Belgium has taken the unprecedented step of placing the entire country on a code red warning.

Spain has also declared a red alert in the Zaragoza region, hit by its worst wildfires in 20 years last month. The EU’s Copernicus Emergency Management Service warned of an “extreme danger” of further forest fires in France and Spain on Thursday, with a “high” or “very high” threat level in Portugal, Italy, Belgium and Germany.

Twenty French départements were also placed on red alert. “Nobody is immune in the face of such extreme temperatures,” said health minister Agnès Buzyn. “There are risks even if you are not particularly vulnerable.” Britain’s Met Office issued similar advice and said the UK all-time high of 38.5 degrees, recorded in Faversham, Kent, in August 2003, could also be exceeded on Thursday.

Local authorities in France have placed restrictions on water usage in 73 out of the country’s 96 départements following dramatic falls in ground and river water levels. “It’s tricky but under control, but we need to be very vigilant,” the junior environment minister, Emmanuelle Wargon, said.

The French energy giant EDF said it was shutting down two reactors at its Golfech nuclear power plant in the southern Tarn-et-Garonne region in order to limit the heating of water used to keep the reactors cool.

Scientists have said such heatwaves are closely linked to the climate emergency and will be many times more likely over the coming decades.

Monthly records were now falling five times as often as they would in a stable climate, the institute said, adding this was “a consequence of global warming caused by the increasing greenhouse gases from burning coal, oil and gas”. – Guardian