Sustainability tops agenda for next generation of budding entrepreneurs 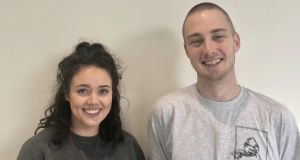 Anna Rafferty Lynam and Alex Shackleton, co-founders of Bélú, 'a kind of a mix between meal and less/reduce in Irish!'

Every year Irish households throw away an average of €700 in food waste. In volume terms that’s about one million tonnes. These figures come from Dublin-based FoodCloud, which was started as a student project by Iseult Ward and Aoibheann O’Brien when they were studying at Trinity College Dublin and is now a thriving social enterprise connecting businesses with surplus food to charities.

Not content to sit on its laurels, FoodCloud is encouraging other Trinity students to come up with new business ideas to address food waste. To this end the company is supporting Bélú founders Anna Rafferty Lynam and Alex Shackleton who are participants in this year’s Trinity Launchbox accelerator for early stage student start-ups.

“The idea for our business originated from a master’s project which was part of an Innovation and Product Development module,” Rafferty Lynam explains. “This module runs as part of the global Sugar Network which brings students and companies together to solve real world problems using a user-centred product design process. The challenge we were given by FoodCloud was how to reduce food waste in the hospitality and food service sector.”

Initially, Rafferty Lynam and Shackleton looked at a surplus food redistribution model but ruled this out because of food safety regulations. They then considered repurposing the food but ruled that out too because of the potentially high energy costs. Their third idea, and the one that has stuck, was a solution to stop food waste at source.

“We realised that an intervention before the waste was generated would make the largest impact and the most effective way to achieve this was through waste analytics,” Rafferty Lynam says. “Currently, there is no data driven solution aimed at reducing plate scraps as no one is looking at the food left behind by diners.”

The founders started by speaking to the people who see what comes back on people’s plates – waiters and restaurant managers – and found a willingness to change menus if there was sufficient evidence to support it. Their system analyses plate scraps and feeds the data to a mobile dashboard where chefs and restaurant managers can see the waste patterns and alter their menus and buying accordingly.

“At the moment waste analytics is a luxury only large-scale businesses can afford and reap the benefits from, but our service will allow hospitality and food service providers of all sizes take more control of their inventory, reduce waste and in turn become more profitable and environmentally friendly,” Shackleton says.

The founders, who both have master’s degrees in mechanical engineering, now have a fully functional prototype of their idea and are planning to finish out the development, secure funding and prepare the product for commercial launch within 18-24 months. The revenue model is still being refined, but it is likely to combine an equipment installation cost and a service fee.

Laura Brennan and Lara Páirceir are the budding entrepreneurs behind EthiCart which aims to make it easy for young adults to shop for food in an ethical and sustainable way. Brennan describes their product as “a user-friendly app with quick, accessible information around food product sustainability and ethical standards.” Both are still undergraduates and are studying computer science and business and sociology respectively. Brennan says they want to “empower consumers to buy products that align with their values so they can feel good about what they’re buying”. They intend to work on developing their business while completing their degrees.

EthiCart came about because the founders, like many of Generation Z (those born after 1995) are very passionate about safeguarding the future of the planet. “We were both worried about climate change and wanted to start shopping more sustainably, but found ourselves unsure what exactly sustainability means? How can we make an impact?” says Brennan. “We saw a huge lack of transparency from food brands and of clear, concise information we could easily digest. It left us feeling powerless and frustrated and we wanted to change this.”

Brennan says that while there are already apps in this space, there is considerable room for improvement. “We are targeted towards millennials and will offer a feature-rich experience to differentiate our product,” she says. “The problem is people are concerned about the environment and want to make a difference, but it can be difficult to gauge products’ sustainability. We are giving brands the platform to take responsibility for the impact of their products. Not too long ago nobody knew the nutritional values of their food. Now the information is available at the touch of a button. We believe the next step in consumer brand transparency is sustainability.”

The founders hope to launch their app in early 2020 and as most of their potential users are active on social media, this will be their key route to market.

AquaHomes founder James Kennedy is a mature student (with an academic background in film and broadcasting) who recently completed a course in Creative Thinking, Innovation and Entrepreneurship at Trinity College. AquaHomes is his third star-tup idea. He has already developed a solar-powered DJ/mobile music station that tours the Irish festivals circuit and started a business turning buses into living spaces.

His latest venture is upcycling discarded barges from the oil industry and repurposing them as floating homes. Kennedy is building his first prototype which will be launched at the beginning of September and will act as a “showhouse” for prospective buyers.

“Ever since the [economic] crash I have found it impossible to find a fair priced one-bed home to rent and I was inspired when I realised there was an opportunity to be a part of the solution to the housing crisis by developing an affordable option for people to buy or rent,” Kennedy says. “In conjunction with this, I wanted to come up with a solution to regenerate areas along the canals in Dublin which are in need of redevelopment. Our mission is to create an eco-conscious community who will help to protect the waterways of Ireland. Active citizenship is embedded in our vision for AquaHomes and we are looking beyond building on land to create new communities utilising the waterways of Ireland.”

Kennedy’s target market is the estimated 1.5 million single people living in Ireland today who cannot afford to buy a house. An AquaHome, which is 9.2m long and 3.2m wide and will have a kitchen, bathroom, bedroom and living area, will cost about €36,000 fully fitted out. Ultimately, Kennedy would like to repurpose an old factory to refurbish the barges (possibly in Wicklow where there are already marine skills in the community) on a commercial scale for sale both here and overseas. Further down the line he has plans to expand the business by designing a completely new type of boat that is suitable for floating living.