Former US special counsel Robert Mueller has reiterated that he had not cleared US president Donald Trump of obstruction of justice or, as Trump has claimed, totally exonerated him. Video: C-Span 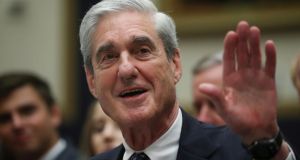 Former special counsel Robert Mueller testifies before a House Judiciary Committee hearing on the Office of Special Counsel’s investigation into Russian interference in the 2016 US presidential election on Capitol Hill in Washington on Wednesday. Photograph: Leah Millis/Reuters

Robert Mueller said he had not cleared Donald Trump of allegations of obstructing justice as the former special counsel testified before Congress about his investigation into the 2016 Trump presidential campaign’s ties with Russia.

Mr Mueller’s appearance before the House judiciary and intelligence committees mark the first time he has been questioned in public about his 22-month probe. It served as a platform for Democrats and Republicans to amplify narratives about Mr Mueller’s investigation that they have long pushed.

Democratic lawmakers read from the report, asking the former special counsel to confirm the most damning of his findings about Mr Trump’s conduct. Their Republican counterparts redirected attention back on to Mr Mueller himself and the origins of the investigation, which the president has long painted as suspect.

Mr Mueller was terse by contrast. He frequently gave one-word answers, asked for the question to be repeated, or referred back to his written findings, saying in various ways: “I stand by what’s in the report”.

Pressed to expand or explain beyond issues specifically addressed in his 448-page document, the former special counsel demurred, holding strictly to his pledge to not go beyond what he wrote.

Jerrold Nadler, the House judiciary chair, sought to pin Mr Mueller down on whether he had “totally exonerated” the president. “No,” the former special counsel replied.

Mr Nadler asked whether justice department policy – which says a sitting president cannot be indicted – would allow Mr Trump to be “prosecuted for obstruction of justice crimes after he leaves office”. Mr Mueller replied: “True.”

When asked later by Ted Lieu, a Democrat from California, whether that policy was the reason he did not indict Mr Trump, Mr Mueller responded: “That’s correct.”

That statement from Mr Mueller seemed to contradict what he had said in the past, Debbie Lasko, a Republican from Arizona, said.

It was not clear if Mr Mueller’s statement was an inadvertent mis-step. He has previously said that he did not make a determination on whether the president could be charged with a crime.

So why didn’t the highly conflicted Robert Mueller investigate how and why Crooked Hillary Clinton deleted and acid washed 33,000 Emails immediately AFTER getting a SUBPOENA from the United States Congress? She must have GREAT lawyers!

It has been reported that Robert Mueller is saying that he did not apply and interview for the job of FBI Director (and get turned down) the day before he was wrongfully appointed Special Counsel. Hope he doesn’t say that under oath in that we have numerous witnesses to the...

Ken Buck, a Republican from Colorado, pressed Mr Mueller on why he did not make a decision on obstruction, despite describing at length several incidents of possible obstruction.

“You unfairly shifted the burden of proof to the president,” said Mr Buck, before asking him whether there was sufficient evidence to charge Mr Trump.

“We did not make that calculation,” said Mr Mueller.

Mr Mueller emphasised the importance of his investigation into Russia’s role in the 2016 election in his opening remarks.

He said the Russian government believed it would benefit if Mr Trump won the White House.

“Over the course of my career, I’ve seen a number of challenges to our democracy. The Russian government’s effort to interfere in our election is among the most serious,” he said.

Mr Mueller told the House judiciary committee he would refuse to answer questions about the origins of the FBI’s investigation into Russian interference. Mr Mueller also said he would not comment on the actions of William Barr, the attorney-general, and disputed claims that he was rebuffed in a bid to become FBI director under Mr Trump.

The judiciary committee hearing was largely focused on the obstruction portion of Mr Mueller’s report. Mr Mueller’s performance was not always assured, with Mr Nadler repeatedly asking him to speak up or to speak into the microphone so he could be heard.

An intelligence committee hearing later in the day will focus more on the first half of his report, which dealt with contacts between the Trump campaign and Russia.

Mr Mueller was accompanied at the hearing by Aaron Zebley, a longtime aide who served as his counsel. Mr Trump fumed on Twitter that “It was never agreed that Robert Mueller could use one of his many Democrat Never Trumper lawyers to sit next to him and help him with his answers.”

In his opening remarks, Mr Nadler hinted at the process of impeachment even as he avoided using the politically fraught word.

“Director Mueller, we have a responsibility to address the evidence you have uncovered,” Mr Nadler said.

Doug Collins, the ranking Republican on the House judiciary committee, said the hearing was “long overdue”.

“Russia meddled in the 2016 election,” Mr Collins said in his opening remarks. “The president did not conspire with Russians. Nothing we hear today will change those facts”.

The report from the former special counsel, who was director of the FBI for 12 years, did not establish any conspiracy between Mr Trump and the Russian government, though he detailed an array of contacts between the Trump campaign and Russia as it interfered in the 2016 US election.

Mr Mueller’s report, largely unread by the American public, portrayed Mr Trump and his campaign as eager to benefit from Russia’s election meddling. He ultimately concluded there was not sufficient evidence to charge a crime.

Mr Mueller, however, did not exonerate the president. Instead, he laid out in dramatic detail several instances where Mr Trump may have obstructed justice, adding: “If we had confidence after a thorough investigation of the facts that the president clearly did not commit obstruction of justice, we would so state.” – Copyright The Financial Times Limited 2019