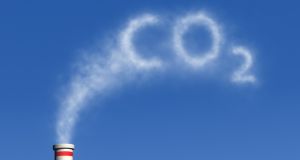 Scientists and engineers across Ireland are working on uses for the carbon we generate. Photograph: iStock

Electric cars and renewable energy alone are not going to solve the climate crisis. The biggest carbon generators are not what we might expect. And industry will increasingly need to capture and sequester carbon in order to stop it escaping it into the atmosphere.

Carbon is currently public-enemy number one. Across Ireland, as well as internationally, however, teams of scientists and engineers are working on good uses for the CO2 (carbon) that we generate. None of these will solve the climate crisis, experts say – but they will help.

In June, international scientists met in Germany to share their research on ideas which might make money from carbon dioxide, such as creating building blocks, fertilisers, fuels, foams, polymers and proteins.

We took a look at three Irish projects worth watching.

“The chemistry of greenhouse gases (carbon dioxide [CO2], methane [CH4] and nitrous oxide [N2O]) are often misunderstood. Yes, burning biogas from anaerobic digestion [micro-organisms breaking down organic matter] produces CO2, but so does a compost heap. Agricultural fields give off N20 that has 298 times more global-warming potential than CO2.” Says UCC’s Professor Jerry Murphy, director of the Science Foundation Ireland’s Marine and Renewable Energy Ireland (MaREI) centre, which has about 200 researchers across the Republic. MaREI carries out research on the energy transition, climate action and marine science.

“Renewables are almost as cheap as fossil fuels, which is great. But a problem with wind is that it doesn’t produce energy on demand, such as during a spell of snow for three weeks,” he says. “Batteries won’t hold enough energy for three weeks. In a decarbonised world we still need bioenergy, which can ramp up and turn off and support wind and solar energy.”

Denmark and Canada sell CO2 to alcohol firms to make bubbles... we can also use biogas as an energy source to make carbon-neutral alcohol

Murphy’s particular area of research focuses on circular economies which convert waste (from food, slurry and the slaughter industry) to renewable fuels. “We have huge emissions from agriculture, particularly from cattle and slurry. These wastes produce methane which is 28 times more warming than CO2. A lot of countries, rather than leave slurry in an open tank emitting methane to the atmosphere, capture this methane in an anaerobic digester for use to fuel buses or trucks, which then emit CO2, which is 28 times less warming than methane. The fuel actually reduces our overall greenhouse-gas emissions. The fuel is created by short-term carbon ingested by the grass-eating cow, rather than from fossil fuels laid down millions of years ago.”

Won’t that still produce environmentally harmful gases, and shouldn’t we be moving entirely to electric fleets? “Heavy trucks can’t bring oysters from the west of Ireland to France on battery power. And while the methane-powered truck releases CO2, this is far preferable to the methane an open slurry pit would release. Furthermore, CO2 in the biogas and CO2 released when burning biogas in power plants can be captured, liquefied and sold.”

Denmark and Canada are two of the countries that sell CO2 to alcohol firms to make bubbles, and Murphy says we can also use biogas as an energy source to make carbon-neutral alcohol.

Carbon-capture technologies are improving, with scientists around the world working on ways of doing so from fossil-fuel burning and placing it in a geologically sealed, underground caverns.

“We are decarbonising electricity,” says Murphy. “But heat and transport produce far more CO2 than electricity. Boats and planes will still probably run on oil in 2040, so we need to look more broadly at the bigger problem and at all solutions. We have to be pragmatic about decarbonisation – and we need to understand chemistry.”

Carbon is an essential element in the production of many medicines, but how can it best be harvested and properly used?

Pat Guiry is a professor of synthetic organic chemistry at University College Dublin and a leading researcher at Beacon, the Science Foundation Ireland-funded centre for bioeconomy research which focuses on developing alternative technologies based on renewable resources. Much of his research is focussed on making compounds that could be useful in medicine.

“The carboxylic acid unit is present in many medicines and using carbon dioxide as the carbon source would be the best way to make them,” Guiry says. At present, we buy it as a bottled gas as we work on the chemistry. But carbon dioxide and methane are products [biogas] of agricultural and food waste, so we are also working on separating out the carbon dioxide from these processes, which would, otherwise, go into the atmosphere.”

Because carbon dioxide is not particularly reactive, Guiry’s team at Beacon tests a variety of metals and alkenes (a type of carbon molecule) to react with carbon dioxide and produce carboxylic acids.

What benefits does this have for industry and consumers? “Besides using carbon dioxide which would otherwise contribute to global warming, this could lead to the creation of new carboxylic acids which would otherwise be very hard to make, and these in turn could be novel medicines,” Guiry explains.

Other scientists at Beacon have also turned their focus to carbon. Bacteria can use carbon dioxide as a food source and, in the process, convert it to useful products including biodegradable plastic. A project at Beacon is investigating how to turn on the expression of genes that encode pathways for carbon dioxide assimilation by bacteria.

AMBER: From carbon to cosmetics and chemicals

“AMBER researchers are also using natural resources such as wood and other forestry-derived materials that allow sustainable production of fibres, lignins and cellulose that can be used in composites or as precursors to robust biopolymers. Wood captures twice its own weight in CO2 growth and forms and effective climate change mitigation if it is processed into long-life materials such as construction materials where it can replace steel and concrete materials that have heavy carbon footprints.”

The nanomaterials used in electronics and various cells can be processed using carbon dioxide, Holmes explains. “It can also be used as a source for insecticides, cosmetics, agrochemicals and pharmaceuticals. One of the biggest challenges is to take the CO2 and turn it into something useful. Research in Amber includes CO2 capture and re-use, with a particular focus on turning CO2 into useful chemicals such as methanol and ethanol, which can be used as fuels, as well as by chemical companies to make other bulk chemicals used in paints, cosmetics, plastics and agrochemicals.”

Part of Holmes’s work is focussed on using CO2 as a safe and inert liquid to generate nanomaterials. “This is a good alternative to using toxic or potentially toxic solvents. It means that we can use less heat to manufacture better polymer films and plastics, as well as produce chemicals in a more environmentally friendly manner.”

Holmes also explains that Amber researchers are also engineering new materials that can split sea water into hydrogen and chlorine. If the process can be done efficiently, the hydrogen generated can be used as a low-carbon fuel, for heating and to generate ammonia (which is the cornerstone from the production of fertilisers).

Putting carbon to good use isn’t the solution, Holmes says, but it can be part of it.

“We do have to move away from burning fossil fuels but, if we are still generating CO2, we may as well do something useful with it. A major focus of our work is on sustainability: researchers are effectively using CO2 from waste streams to produce useful materials, as opposed to using up more of the Earth’s finite resources.”