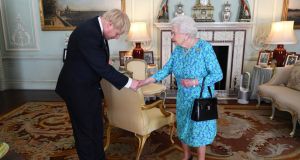 Boris Johnson carried out a brutal cull of Theresa May’s ministers as he formed a new UK government dedicated to his goal of delivering Brexit.

Mr Johnson used his first speech as prime minister of the United Kingdom to insist that Brexit will be delivered, and that he will give the country “the leadership it deserves”.

Sajid Javid was appointed as Mr Johnson’s chancellor, with Brexiteers Priti Patel and Dominic Raab returning to the cabinet as home secretary and foreign secretary respectively.

The appointments came after Mr Johnson wielded the axe, with more than half of Mrs May’s cabinet either quitting or being sacked. Jeremy Hunt, Mr Johnson’s rival in the Tory leadership race, left the government after refusing to be demoted from foreign secretary.

Penny Mordaunt and Liam Fox, prominent backers of Mr Hunt, were among the first to be sacked as Mr Johnson carried out a radical reshaping of the cabinet. Other ministers shown the exit include Damian Hinds, Greg Clark, David Mundell, Karen Bradley, James Brokenshire, Jeremy Wright and Mel Stride.

Speaking outside 10 Downing Street earlier, the Tory leader said he would meet the October 31st deadline “no ifs or buts”. Mr Johnson promised he would “change this country for the better”.

Arriving in Downing Street after being invited by Queen Elizabeth to form a government during an audience at Buckingham Palace, Mr Johnson vowed to prove the Brexit doubters wrong.

He said: “I am standing before you today, to tell you the British people, that those critics are wrong – the doubters, the doomsters, the gloomsters are going to get it wrong again.”

He added: “And we are going to fulfil the repeated promises of Parliament to the people and come out of the EU on October 31st, no ifs or buts.

“And we will do a new deal, a better deal that will maximise the opportunities of Brexit while allowing us to develop a new and exciting partnership with the rest of Europe based on free trade and mutual support.

“I have every confidence that in 99 days’ time we will have cracked it.”

He promised action to fix the social care crisis, make the streets safe and improve the NHS.

He said: “I will take personal responsibility for the change I want to see.

But on the issue of the Irish Border – the main stumbling block in reaching a Brexit deal – Mr Johnson said he was “convinced” a solution could be found without checks at the Irish Border and without the “anti-democratic backstop”.

Mrs May’s farewell speech in Downing Street was disrupted by a cry of “stop Brexit” from a protester outside. In reply, she joked: “I think not.” But she made clear her desire for Mr Johnson to seek a deal with Brexit, having previously warned about the risks of a no-deal departure. Flanked by husband Philip, she said: “I repeat my warm congratulations to Boris on winning the Conservative leadership election.

“I wish him and the government he will lead every good fortune in the months and years ahead.

“Their successes will be our country’s successes, and I hope that they will be many.” But she added: “Of course, much remains to be done – the immediate priority being to complete our exit from the European Union in a way that works for the whole United Kingdom.”

In his resignation letter, chancellor Mr Hammond said the new prime minister should be “free to choose a chancellor who is fully aligned with his policy position”.

He wrote: “Despite the uncertainty created by the unresolved issue of Brexit, we have been able to make notable progress in rebuilding the public finances and preparing the British economy for the opportunities ahead.”

Mark Spencer, a popular former remainer and experienced whip, has been given the job of chief whip, while Mr Johnson has hired Andrew Griffith, one of the most senior executives at broadcaster Sky, to become his chief business adviser.