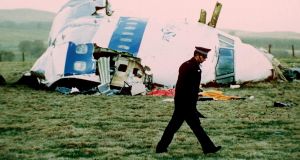 The explosion on board Pan Am flight 103 killed 270 and caused the plane to crash into the Scottish town of Lockerbie in December 1988. Photograph: AP Photo/ Martin Cleaver

More than 30 years on, Scottish investigators are combing Stasi files and quizzing former agents on suspicion that East Germany’s secret police was involved in the Lockerbie air disaster.

Investigators suspect the Stasi may have provided logistical support – and possibly a bomb timer – to Abdelbaset al-Megrahi, the Libyan intelligence officer found guilty in 2001 of murdering 270 crash victims.

Seven ex-Stasi agents, now in their 70s and 80s, have been identified in the eastern city of Frankfurt an der Oder as having possible links to the explosion on board Pan Am flight 103 that killed 270 and caused the plane to crash into the Scottish town.

Eastern German prosecutors confirmed on Wednesday that they received five EU assistance requests from Scotland for a total of 20 interviewees between June 2018 and this month.

“We’re dealing exclusively with witness questioning,” said a state prosecutor spokeswoman, confirming that those to be questioned were former employees of East Germany’s ministry for state security (Stasi).

The Pan Am flight was on its way from London to New York in 1988 when it exploded, killing all on board and 11 on the ground when the flaming wreck crashed into Lockerbie.

The explosion was caused by a bomb in a suitcase stored in the plane’s hold.

The East German link goes back to the Lockerbie trial in 2000 when prosecutors identified Stasi contacts of a Swiss businessman who supplied the bomb timer. Investigators suggest the Lockerbie atrocity was revenge for the downing of an Iran Air passenger flight by a US missile cruiser in 1988.

Former Libyan leader Muammar Gadafy had ordered the bombing, although he denied it until his death in 2011.

The Stasi helped with financing or was directly involved in planning attacks that it believed would destabilise western Europe.

East Germany financed the extreme-left Red Army Faction, behind a series of West German bombings, kidnappings and killings in the 1970s. The Stasi was also linked to the 1986 bomb attack of a West Berlin disco popular with US soldiers serving in the cold war city.

Nearly 30 years after East Germany’s end, the Stasi’s scrupulous file-keeping has confirmed its terrorist involvement and exposed other cases.

A decade ago, files revealed that a police officer who shot dead a West Berlin student in 1969 was a paid Stasi informant.