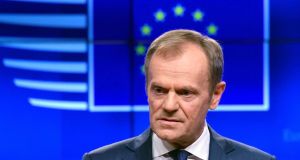 The UK will be given a short extension to the Brexit process as long as the House of Commons next week passes the withdrawal agreement, European Council president Donald Tusk told journalists in Brussels on Wednesday.

Mr Tusk responded warmly to the letter British prime minister Theresa May sent him on Wednesday seeking an extension to article 50. He said European Union leaders would discuss whether the “technical” extension to facilitate what was necessary to put the withdrawal agreement into law would last until June 30th, as she requested, or only until May 23rd, the date of the European Parliament elections.

Mrs May had made clear in her letter that the UK was determined not to contest the elections and diplomats said there could be legal problems for the new parliament’s legislative acts if the UK as a member did not participate in the polls.

Mr Tusk also said that the European Council should not have any problem on Thursday ratifying the agreements made in Strasbourg last week between the EU and UK – legal assurances about the functioning of the backstop. Mrs May said in her letter that the Strasbourg deal was important to her need to make changes to the withdrawal agreement sufficient to allow it to be put to parliament again.

Mr Tusk said that the conditional extension could be approved by “written procedure” at the end of next week, so it would not require the reconvening of the summit.

Here is the letter to Tusk: pic.twitter.com/y4eRdGW4Lw

But in the event that the meaningful vote is not passed, it would probably be necessary to call the leaders again together next Thursday or Friday, to consider any further request from Mrs May for either a short or long extension – the UK is due to leave the EU on Saturday, March 30th. Should the British prime minister decide not to make a further extension request the UK will leave on schedule on a no-deal basis.

Importantly, Mrs May’s extension request on Wednesday was couched specifically as a means of passing legislation should the withdrawal agreement be passed. It cannot be the basis of a justification for an extension in any other circumstances.

How leaders would respond to another request is not entirely clear. Senior diplomats were keen to emphasise the need to help a positive vote and were reluctant to discuss other scenarios.

But one diplomat, returning to themes taken up by Minister for Foreign Affairs Simon Coveney and EU chief negotiator Michel Barnier in recent days, insisted that any UK justification for a long extension would have to be based on a “game-changer” approach by Mrs May to provide persuasive arguments that she could turn around support for the withdrawal agreement or any softer Brexit scenario.

EU leaders would need to be convinced that they would not end up in the same position in nine or 12 months, at the end of a long extension.

EU officials and diplomats, citing an unwillingness to interfere in the UK’s internal affairs, refused to be drawn on whether that meant a requirement to hold another popular vote, or a new approach by building a cross-Commons consensus, which would inevitably lead to a softer Brexit.

Mr Tusk and other EU officials were on Wednesday night still expressing confidence that a deal could be done before the UK is forced to leave – and determination that they would not revisit the withdrawal agreement or the various assurances already given. “Discussion closed,” was how one senior diplomat put it, insisting: “The withdrawal agreement is the only way to assure an orderly Brexit.”

The summit is due to convene on Thursday afternoon for a discussion on Brexit. Mrs May will address the leaders about 3.30pm (2.30pm Irish time) and then leave the 27 remaining leaders to their debate.