Russia may be having second thoughts about crackdown on rap 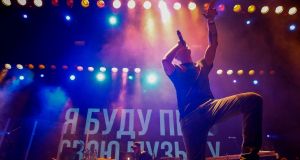 Rapper Oxxxymiron performs during a concert in support of then jailed rapper Husky at a Moscow club on November 26th. Photograph: Maxim Zmeyev/AFP/ Getty

Dmitry Kuznetsov, better-known by his stage name Husky, was a minor star on Russia’s flourishing hip hop scene until police arrested him last month for staging an impromptu concert from the roof of a parked car. A brief brush with the law has boosted the 25-year-old rapper’s profile and turned his I’ll Sing My Music single into a national battle cry against arts censorship.

Husky is by no means the only artist feeling the heat as Russia cracks down on alternative music. But the public outcry about his case has highlighted the risks the Kremlin faces as it moves to exert control over Russian youth’s favourite form of musical entertainment.

Rap arrived in Russia from the West in the 1990s and exploded in popularity as the internet came of age, freeing performers from the confines of state controlled television. Top rappers can fill whole stadiums with fans at public concerts, but their main outlets are on social networking sites where they count their success not in thousands but millions of viewer clicks.

Hip hop has overtaken pop and rock to become the main music in Russia, says Miron Fyodorov, otherwise known as Oxxxymiron, one of Russia’s most famous rap artists. “It’s like a revolution going on and it’s going to grow further.”

Troubles began for rappers last month after a deputy in the Leningrad region parliament asked Russia’s prosecutor to ban alternative music concerts, saying they promoted all kinds of disruptive social behaviour from Satanism to suicide, extremism and betrayal of the motherland.

Russian rap, laced with expletives and references to drugs and alcohol, certainly doesn’t jive with Vladimir Putin’s policy to restore traditional values. But political imperatives are also driving the Kremlin to act.

Rap’s growing popularity had “inevitably” made it a battleground for the hearts and minds of youth, Sergei Markov, a pro-Kremlin political analyst told Echo Moskvy radio. Russia’s protest movement – led by Putin’s arch foe Alexei Navalny – was “fashionable” among the young so rappers would feel compelled to tilt towards the opposition whatever their political views, he added.

Russian showbusiness stars have spoken up for rappers, warning the Kremlin not to repeat the communist party’s ill-judged decision to ban rock bands that helped radicalise Soviet youth in the 1980s. The US state department might well be funding the hip hop crackdown to undermine the Kremlin, joked Alexander Makarevich, a veteran Russian rock artist.“The best way to fall out with the young is to think up something to make impossible for them,” he said.

Husky leapt on to the roof of a car to perform in the southern city of Krasnodar on November 21st after a local club, citing concern about Russian anti-extremist laws, abruptly cancelled a gig he had planned. The following day he was sentenced to 12 days in police detention on twin charges of petty hooliganism and refusing to take a drink and drugs test.

Rappers are not a united group, but Oxxxymiron immediately rallied fellow stars Basta and Noize MC, to stage a joint concert in Moscow to demonstrate solidarity with Husky and protest against government censorship of the arts.”It’s not just about Husky, but about us and the future of music in Russia,” Oxxxymiron told fans.

In a surprise development Husky was released a few hours before the event began having served less than half of his sentence. Navalny, who attended the Moscow concert with his family, said the authorities had let the rapper out “not just because they are scared but because they know they are in the wrong”.

That may be but law enforcers have continued to make problems for rappers. Husky called off planned gigs in six cities last month saying he had faced “billions of difficulties and pressure from you-know-who”. IC3PEAK, a rap duo made up of Nasty Kreslina and Nikolai Kostylev said they had been tailed by Russian special services in the city of Perm where their planned concert was cancelled and briefly detained by police when they arrived in Novosibirsk for another event.

Police were taking a selective approach and targeting junior league rappers rather than risking confrontation with big stars, said Elena Saveleva, a spokeswoman for Noize.“I don’t like what’s going on. Music and politics should not be mixed,” she told The Irish Times.

Signs that Kremlin spin doctors were scrambling to paper over the rift with the rap community came on Sunday when Dmitry Kiselyev, the host of Rossiya TV’s popular weekly news show, dedicated a full 20 minutes to discussing the hip hop craze and its links – not to Afro-American street culture – but to Russia’s legendary poetic traditions. “Rappers’ verbal associations are not the language of polite society,” he said, “but it’s not worth creating nightmares for them. They’re simply people.”

Ms Saveleva said she hoped rappers would not accept financial support from the state. “Serebrennikov took a grant and look what happened to him,” she said, referring to the progressive Russian theatre director Kirill Serebrennikov, who is undergoing trial on charges of embezzling state art funds that are widely believed to be politically motivated.