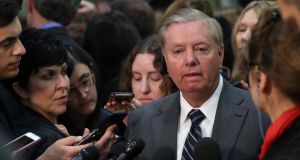 US senator Lindsey Graham speaks to reporters after attending a closed-door briefing on the death of the journalist Jamal Khashoggi, by CIA Director Gina Haspel at the US Capitol in Washington on December 4th Photograph: Jonathan Ernst/Reuters

The director of the US intelligence services met with senior members of the US senate in a private room in the basement of the US Capitol for a classified briefing after senators complained that she was not present last week at a briefing given to them by secretary of state Mike Pompeo and defence secretary James Mattis.

Ms Haspel travelled to Turkey last month in the wake of the Mr Khashoggi’s killing.

Speaking after the hour-long meeting with Ms Haspel, several senators said they believed that the 33-year-old crown prince was responsible for the murder of the Saudi journalist, who was killed and dismembered after entering the Saudi consulate in Istanbul on October 2nd.

Their findings put the senate at odds with the White House, which has said there is no conclusive proof that the Saudi crown prince ordered the murder of the prominent journalist.

Republican senator Lindsey Graham, the most vocal critic of Saudi Arabia since Mr Khashoggi’s murder despite being an ally of US president Donald Trump in recent months, said he could no longer support US arms sales to Saudi Arabia while the current leadership is in charge.

“You have to be wilfully blind not to come to the conclusion that this was orchestrated and organised by people under the command of MBS,” the South Carolina senator said, using the crown prince’s initials.

While there was no “smoking gun” he said, there was a “smoking saw”, referring to the weapon that was allegedly used by the assassins in the Istanbul consulate.

Making a distinction between Saudi Arabia and the crown prince, Mr Graham said while Saudi Arabia was a “strategic ally”, the relationship was not worth saving “at all costs”.

Mohammed bin Salman was “crazy,” “dangerous” and a “wrecking-ball” who had put Riyadh’s relationship with the United States at risk, he said.

Bob Corker, another Republican and the outgoing chairman of the senate foreign relations committee, said he believed the crown prince had “ordered and monitored” the killing of Mr Khashoggi. “If he was in front of a jury, he would be convicted in 30 minutes,” Mr Corker said of the crown prince.

It was not clear what legislative measures congress would now consider to respond to a strengthening conviction among key senators that the Saudi leadership ordered the murder of the Washington Post contributor.

While the US has placed sanctions on the 17 individuals who are alleged to have carried out the murder in the consulate, it has refrained from other measures, such as a halt on arm sales to Saudi Arabia or a reassessment of US support for the Saudi-led efforts in Yemen. Mr Graham suggested he would favour backing a call to stop arm sales.

Mr Trump and his senior officials had said there was no conclusive evidence of the crown prince’s involvement in the murder. This puts the White House at odds with the CIA.

As the bipartisan group of senators was being briefed by the CIA director, Mr Trump’s national security adviser, John Bolton, told the attendance at an event in Washington that while the murder of Khashoggi was “a heinous crime”, “it’s a region where a lot of heinous crimes are committed – by Iran, by the Assad regime by terrorists all around. So it’s not a case of saying ‘well, this is very distasteful’ ”.