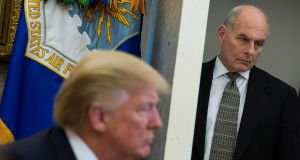 Retired marine Gen John Kelly tapped as chief of staff by US president Donald Trump last year to bring order to his chaotic White House will leave the job by the end of the year.

This is the latest departure from the president’s inner circle after a bruising mid-term election for his party. Mr Trump, who made the announcement to reporters on the White House lawn before departing for the Army-Navy football game in Philadelphia on Saturday, said he would name a replacement for Kelly, perhaps on an interim basis, in the next day or two.

“John Kelly will be leaving. I don’t know if I can say ‘retiring,’ ” said the president. “But he’s a great guy. John Kelly will be leaving at the end of the year.” The leading candidate to replace Kelly is Nick Ayers, vice-president Mike Pence’s chief of staff and a Republican political operative, who possesses the kind of savvy about campaigns that Trump has craved. Gen Kelly, a career military officer before becoming Trump’s first homeland security secretary, lacked such experience.

Mr Ayers (36) has told the president he would serve on an interim basis through the spring, when his family will return to Georgia, according to sources. But Mr Trump, who frets about the image of a White House in constant chaos, wants a full-time replacement and is eager for Mr Ayers to stay for the duration.

Mr Trump must also begin to navigate a new power structure on Capitol Hill that will be ushered in next month when Democrats assume control of the House. The mid-term election, in which Democrats gained 40 seats in the House, laid bare the challenges the president faces in his 2020 re-election campaign.

The chief of staff’s exit adds another prominent name to the list of core advisers who have left after trying to manage the president through his nearly two years in office, often finding themselves shunned and sidelined for their efforts. Gen Kelly did not show up to work on Friday. But Mr Trump and Gen Kelly met in the White House residence on Friday night and hashed out the details of a departure that had been anticipated for months, according to sources. Mr Pence and Mr Ayers also attended the meeting.

Gen Kelly’s resignation had long been rumoured amid signs that he and Mr Trump had grown irritated with each other. The president – as freewheeling as Gen Kelly is methodical – privately fumed that he believed his chief was hiding things from him and frequently upbraided him in the West Wing on matters large and small.

The chief of staff, who often said privately that he did not believe that Mr Trump appreciated or understood his own job, had taken to telling colleagues, “I don’t need this” after such criticism from the president. Yet for months, the dysfunctional dynamic continued without a firing or a resignation, until now that is. – New York Times