Country has been without a government since September following elections 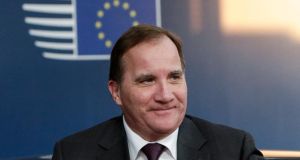 Stefan Lofven is currently heading a caretaker administration until a government can be formed Photograph: Aris Oikonomou/Pool/Reuters

Attempts to form a government in Sweden were back at square one on Monday after the Centre party, citing policy differences, said it would vote against a second term in office for Social Democrat leader Stefan Lofven.

The country has been without a government since September, when an election delivered a hung parliament that has already rejected both Lofven and the leader of the four-party, centre-right Alliance as prime minister.

Despite being nominally part of the Alliance, the Centre and Liberal parties said they were ready to support left-leaning Lofven as a means of breaking the deadlock and keeping the anti-immigration Sweden Democrats politically isolated.

But Centre leader Annie Loof said on Monday that Lofven – premier before the election and currently heading a caretaker administration – had not accepted her demands for lower income taxes and more liberal labour laws, which were the price for support.

“We would have need to see considerably more liberal political reforms in order for the Centre party to be able to come to an agreement and allow Stefan Lofven four more years,” she told reporters.

Loof’s agenda was a hard sell for Lofven, a former welder whose party is heavily backed by unions and who also relies on support from the Left Party.

“We have not taken any new decision on [whether to back Kristersson],” said Loof, whose party has already voted against him once in parliament.

The election gave the hard-right, populist Sweden Democrats the balance of power.

Lofven said he was still ready negotiate over a government that would sit in the middle ground of Swedish politics.

“The most likely alternative to this kind of compromise . . . is a government that is dependent on forces that have their origin in the white-supremacy movement,” he said.

But his position could be further weakened as soon as Wednesday when parliament votes on his budget for 2019.

Without support from the Centre or Liberal parties, it may not pass and parliament could adopt a budget motion put forward by the Moderate and Christian Democrat parties, both in the Alliance, that includes roughly 20 billion crowns (€1.9 billion) in tax cuts.

1 Clontarf tenant says her garden was ‘destroyed’ without warning by Irish Rail
2 Fianna Fáil election candidate was disqualified from being company director
3 RTÉ receives complaint from union after ‘issue’ with spokeswoman’s accent
4 Election 2020: Fine Gael and Fianna Fáil set to reveal spending plans worth billions
5 How to get through the health insurance maze
Real news has value SUBSCRIBE