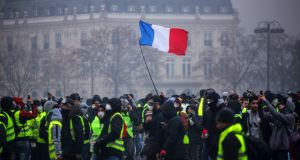 Demonstrators near the Arc de Triomphe during a protest of “yellow vests” against rising fuel prices and living costs in Paris on Saturday. Photograph: AFP/Getty Images

The French government said on Tuesday it would suspend planned fuel tax increases for six months, in response to violent protests against the measures by the so-called gilets jaunes movement

Edouard Philippe, prime minister, announced the moratorium on the increase in the fuel tax scheduled for January 1st, in an attempt to ease the “yellow vests” protest, after meeting MPs from the governing party.

“These decisions must ease tensions and bring back serenity to the country,” Mr Philippe said in a televised address.

The move marks the first time in Emmanuel Macron’s 18-month presidency that he has backed down on measures in the face of street protests, and comes as he faces record low approval ratings.

The government had planned to raise taxes on petrol and diesel by 2.9 cents and 6.5 cents a litre, respectively, from January, partly to curb rising carbon emissions. But the proposed policy has provoked weeks of increasingly violent protests across the country by gilets jaunes – named after the fluorescent security vests car drivers have to keep in their vehicles.

The demonstrations, which began as an online protest, have morphed into a wide-ranging revolt against stagnating wages, a drop in people’s purchasing power, and against Mr Macron himself. The fuel tax increase would have disproportionately affected those on low incomes and rural populations reliant on cars, and some felt it was the last straw by a president whose policies are perceived to favour the rich.

Earlier on Tuesday morning Stanislas Guerini, who on Saturday was elected the new leader of Mr Macron’s La République en Marche, said he was in favour of a moratorium on raising fuel taxes.

“Yes, I think it would be healthy, I think we must appease the country,” he said on RTL radio.

About 136,000 demonstrators were recorded across France on Saturday, and violence escalated in the French capital, where at least 263 people were injured and 412 arrested. In the wealthy west and centre of Paris, stores were smashed and looted, barricades erected, and the Arc de Triomphe covered in graffiti.

While the majority of the demonstrators were peaceful, the protests were infiltrated by both the far-left and the far-right, alongside wreckers, or casseurs.

The violence has so far not undermined the movement’s strong public backing. An opinion poll by Harris Interactive, taken after Saturday’s protests, suggested the gilets jaunes have an approval rating of about 72 per cent, the same as before the clashes.

A freeze of planned fuel tax increases was one of a number of measures called for in an editorial by 10 self-proclaimed gilets jaunes representatives published on Sunday in the weekly newspaper Le Journal du Dimanche. They also demanded the holding of countrywide consultations over taxes.

Christophe Castaner, interior minister, said on Sunday that measures under consideration by the government include the imposition of a state of emergency and the deployment of soldiers to help contain the next protests, which are scheduled for Saturday.

On Monday Mr Philippe held separate meetings with opposition party leaders, in which they demanded the scrapping of the planned increase in fuel taxes. The same day striking students closed down 100 high schools and rising fuel shortages were reported in some parts of the country. – Copyright The Financial Times Limited 2018

1 O’Doherty and Waters ordered to pay legal costs of case against State over Covid-19 laws
2 Madeleine McCann case: ‘We assume the girl is dead’, German prosecutors say
3 Strict rules on queuing as Dublin shops prepare to reopen
4 Coronavirus: Ireland has higher per capita death ratio than US, study finds
5 Tyrone midwife on the cover of Vogue magazine
Real news has value SUBSCRIBE