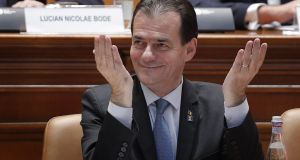 Romania’s parliament has approved a new government under the leadership of prime minister Ludovic Orban, as his centre-right National Liberal party (PNL) took power after a period of torrid rule by the populist Social Democrats (PSD).

Most deputies from the PSD and Pro-Romania party boycotted Monday’s session of parliament, but Mr Orban’s proposed government secured 240 votes in a confidence motion, seven more than it needed for victory.

The new cabinet aims to lead the country until elections next year, and Mr Orban’s appointment gave a boost to the man who nominated him, Romanian president Klaus Iohannis, who will seek another term as head of state in a national ballot on Sunday.

Parliament in Bucharest voted last month to end 2½ years of PSD rule that were dominated by attempts to soften anti-corruption legislation and increase government control over the judiciary, drawing criticism from the European Union and sparking the country’s biggest protests since 1989.

“We are coming after a censure motion that ended a period of governance that did a lot of harm,” Mr Orban told parliament before the confidence vote.

“We must get past this moment and start on a new path of reconstruction and dialogue, that puts Romania back on its Euro-Atlantic trajectory.”

He also denounced what he called an unprecedented decision by the PSD and Pro-Romania to boycott the confidence vote in his government.

Mr Orban said they “showed a complete lack of understanding . . . [and] respect for Romanians’ needs and show they only care about their election prospects.”

The PNL says it wants to cut bureaucracy and encourage growth and investment while allowing anti-corruption agencies to work without interference and repairing Romania’s tarnished reputation with Brussels.

One of the government’s first tasks will be to name a new Romanian EU commissioner, after Brussels rejected nominees proposed by the outgoing PSD cabinet.

The PSD did not recover from a triple blow suffered in May, when it performed poorly in European elections, lost a simultaneous referendum on its legal reforms, and saw party chief and de facto government leader Liviu Dragnea jailed on graft charges the following day.

Polls suggest Mr Iohannis could secure an outright majority in Sunday’s election, and even if a run-off is required he appears to face little threat from the challenge of outgoing PSD prime minister Viorica Dancila.

Campaigning in his home city of Sibiu in Transylvania, Mr Iohannis said on Sunday that he wanted to help build a Romania with good public services, “where thieves stay in prison, not at the political controls . . . and where politicians encourage judicial independence and don’t try to place this system under political control”.