Church in Illinois withheld names of 500 priests accused of abuse 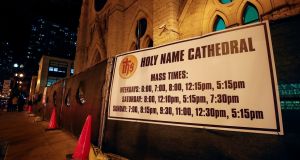 The Catholic Church in Illinois withheld the names of at least 500 priests accused of sexual abuse of minors, the state’s attorney general has said in a scathing report that accused the church of failing victims by neglecting to investigate their allegations.

The preliminary report by attorney general Lisa Madigan concludes that the Catholic dioceses in Illinois are incapable of investigating themselves and “will not resolve the clergy sexual abuse crisis on their own”.

The report said 690 priests were accused of abuse, and only 185 names were made public by the dioceses as having been found credibly accused of abuse. “The number of allegations above what was already public is shocking,” Madigan said in an interview.

The Illinois report is only the latest effort by state prosecutors to hold the Catholic Church accountable by scrutinising the church’s own records. At least 16 state attorneys general in the US have initiated investigations of varying scope since August, after a devastating grand jury report in Pennsylvania accused more than 300 priests of sexual abuse over 50 years, and accused bishops of covering up.

Three-quarters of the allegations against clergy were either not investigated, or were investigated but not substantiated by the dioceses, the report found, based on files that the dioceses turned over to the attorney general’s office. A pattern emerged from the files in which dioceses often failed to find a claim credible if there was only one victim, the report said.

They also failed to investigate at all if the accused priest was deceased or reassigned, or belonged to a religious order (such as the Franciscans, Marists or Jesuits). The dioceses often discredited survivors’ claims by “focusing on the survivors’ personal lives,” the report said.

Representatives of all six dioceses in Illinois co-operated with the investigation by meeting with the attorney general and her staff, voluntarily producing thousands of documents and providing access to hundreds of clergy files related to abuse allegations, the Illinois report said.

Once the attorney general’s office began investigating, the report said, the Illinois dioceses disclosed the names of 45 more clergy who were deemed by the church to be credibly accused of abusing minors – most of them cases the dioceses knew about for years.

“I want to express again the profound regret of the whole church for our failures to address the scourge of clerical sexual abuse,” Cardinal Blase J Cupich, archbishop of Chicago, said in a statement. “It is the courage of victim-survivors that has shed purifying light on this dark chapter in church history.”

In Chicago, Illinois’ largest city, Roman Catholics have long dominated some neighbourhoods and have held a place in the political fabric of the city. Thirty-three per cent of residents in the Chicago area are Catholic, tying with Philadelphia as having the second-highest density of Catholics in a US city, according to a 2014 survey by the Public Religion Research Institute.

Kate Bochte, a spokeswoman in the Chicago area’s branch of Survivors Network of those Abused by Priests, said that the idea that nearly three-quarters of the allegations were not deemed credible was a “huge indicator that the church is incapable of these investigations.

“And think about all those people who came in – 75 per cent of the people – what happened to them?” she said. “They were basically turned away after they explained the most difficult thing that had ever happened to them. They were left on their own – just basically, like, we don’t believe you.”

Madigan, a Democrat who served four terms as Illinois’ attorney general and is days away from leaving office, said she had two reasons for bringing preliminary findings forward at this point. She said that survivors of abuse were owed a sense that their concerns were being pursued. Since her office announced a hotline for survivors to report such abuse several months ago, 300 people have called.

She also said she wanted to put her findings out before the US bishops gather at Mundelein Seminary near Chicago in early January. About 300 bishops are expected at an extraordinary weeklong spiritual retreat – ordered by Pope Francis – to pray and reflect on the church’s role in the sexual abuse of children.

“The priority has always been in protecting priests and protecting church assets,” Madigan said in an interview. “Time and time again, the church says, ‘Well, this all took place years and years ago.’ But it’s a crisis in the present for all the people who have had to live with it.”

Kwame Raoul, a fellow Democrat who will replace Madigan in January, said he was committed to continuing the investigation Madigan had begun, and praised her for opening it. He said he would work closely with prosecutors around the state on the issue.

A news release from the archdiocese of Chicago said that the report, by lumping together all six dioceses, “makes it difficult to discern” which findings apply to the archdiocese of Chicago. But Madigan was dismissive of suggestions that the six dioceses across the state ought not to be grouped together when it comes to judging their handling of abuse over decades. “They all have problems across the board,” she said.

The bishops’ common practice has been to make public only allegations that were found “credible” or “substantiated”. But dioceses have different standards and processes for determining what meets those two criteria. The attorney general’s report said the bishops should figure out a common standard, and should always turn allegations over to law enforcement.

Only two Illinois dioceses – Chicago and Joliet – had published lists of clergy credibly accused of abuse of minors before the attorney general opened its investigation. The diocese of Joliet said in a statement Wednesday that the attorney general has not informed the diocese of any failures to investigate or of “any inaccuracies or omissions” in files that would cause the diocese to have to amend its public list of credibly accused priests.

Victims advocates point out that the process of making public the names of accused priests is often what gives other victims the strength to come forward, when they realise that they were not the only one abused by that perpetrator.

Bill Reidy, who has described being abused by a Jesuit priest at a Chicago area Catholic high school, said the attorney general’s report would be helpful to those who were abused. “It’s important to have it come out, but it took too long,” he said. “I have a feeling there’s going to be more.” – New York Times