Paris braces for fifth weekend of protests by ‘yellow vests’ 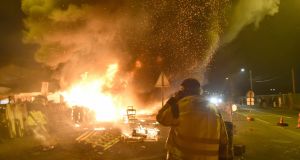 Thousands of riot police and armoured vehicles will be deployed in Paris on Saturday as France anticipates a fifth weekend of anti-government protests in the capital and other cities across France.

Despite government pleas for the gilets jaunes – or yellow vest – protesters to call off street demonstrations in the wake of the terror attack in Strasbourg, many vowed to continue their struggle. The grassroots protest movement has continued all week on roundabouts and tollbooths and authorities believe Saturday’s street marches in major cities will go ahead.

The gilets jaunes – named after the high-visibility yellow jackets worn by protesters – began as a revolt over an environmental fuel tax a month ago and has morphed into an anti-government movement against low incomes and tax inequality, with daily barricades on roads around the country. Weekly demonstrations in Paris each Saturday have been accompanied by rioting, arson and looting of shops on the edge of the protests.

Emmanuel Macron this week made concessions aimed at chipping away at the high level of public support for the movement. The French president promised an effective rise in the minimum wage and tax-free overtime, and said he would exempt many pensioners from a highly unpopular tax he had imposed on them. The government had earlier rolled back the green fuel tax that sparked the protests. But the movement shown no sign of stopping.

“It’s really the time to keep going,” Eric Drouet, a senior figure in the movement, said in a video posted on Facebook. “What Macron did on Monday was a call to carry on because he has started to give ground, which is unusual for him,” he said.

After four people were killed, one left in a coma, and 11 others injured in a gun attack in Strasbourg this week, the government appealed for Saturday’s street marches in Paris and other cities to be called off, saying security forces would be too stretched.

“I find it inadmissible that today we are applauding our police and then tomorrow some people think it’s okay to go and throw stones at them,” the interior minister, Christophe Castaner, said on Friday from Strasbourg.

The government spokesman, Benjamin Griveaux, said: “It would be better if everyone could go about their business calmly on Saturday, before the year-end celebrations with their families, instead of demonstrating and putting our security forces to work once again.”

Laetitia Dewalle, a protester from the Val D’Oise, said: “We’re continuing – always in a peaceful spirit.” She said she understood that there had been rioting on the edges of demonstrations but said: “This movement itself is not violent. That’s not our way of doing things.”

Some other gilets jaunes have called for protests to remain local – at roundabouts and tollbooths, rather than in big cities.

Six people have died – mostly in road accidents – since the protests began, and more than 1,400 have been injured. – Guardian