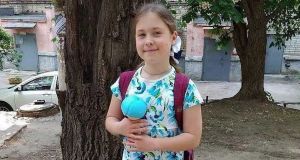 Elizaveta Kiseleva (9): her body was found in an abandoned garage in Saratov on Thursday evening, the day after she disappeared on her way to school.

Police in the southern Russian city of Saratov used pepper spray to disperse hundreds of protesters demanding that the suspected killer of a local schoolgirl be handed over to a people’s court to face justice.

The body of nine-year-old Elizaveta Kiseleva was found in an abandoned garage in Saratov on Thursday evening, the day after she disappeared on her way to school.

Police have arrested a man who has confessed to the murder. However, many people in Saratov believe the Russian judiciary deals too softly with child homicide and want the girl’s killer to face a people’s “lynch court”.

As news spread late on Thursday night that Elizaveta’s body had been found, hundreds of irate protesters gathered at the scene of the crime. Dramatic videos circulating on local media show the crowd hurling stones at a police van believed to be carrying the murder suspect and shouting “Open up!” and “Kill him!”

Law enforcers carrying shields used pepper spray to drive the protesters away, but they moved on to a local police station where they stood throughout the night demanding that the killer be brought out to face popular justice.

Russia’s investigative committee announced on Friday that it had sent a team of criminologists to Saratov to help local police with the investigation and said the schoolgirl’s murderer would face the “harshest punishment allowable under Russian law”.

Passions have been running high in Saratov since Elizaveta vanished after leaving home to go to school early on Wednesday morning. Almost 2,000 local volunteers joined the police and emergency services in a round-the-clock search across the city and local countryside. Her body was eventually discovered in one of the buildings at a shabby garage collective just 70mfrom her home. Her coat and shoes lay concealed in rubbish at the premises.

Russia imposed a moratorium on the death penalty in 1996 as it moved to humanise its criminal legislation in preparation for entry to the Council of Europe.

Many Russians believe the country’s courts are too soft on violent criminals and the horrific murder of the schoolgirl has unleashed demands for the return of capital punishment.

“Democracy and tolerance have played themselves out. Bring back the death penalty in Russia,” Olga Alimova, a communist deputy representing the Saratov region in the Russian parliament, tweeted.

Similar calls came from a petition addressed to Russian president Vladimir Putin demanding “Death for the death of the child” that gathered more than 27,300 signatures in the hours after its launch on the change.org website on Friday.

The investigative committee said Mikhail Tuvatin, an unemployed Saratov resident who has served prison sentences for theft and sexual assault, had admitted he killed the girl.

In a video released by the committee, Tuvatin said he had been squatting in the garage for some months and became alarmed when the schoolgirl passed by and asked if it was his property. Fearing repercussions if the place belonged to her parents, he dragged her inside and killed her.