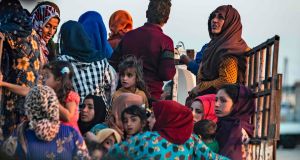 The EU has strongly condemned Turkey’s incursion into northern Syria.

EU diplomats expressed anger at what was seen as a destabilising betrayal by the US of Kurdish allies, and there are fears that the invasion may trigger a new wave of refugees from Turkey into Greece. There are “huge humanitarian concerns”, one senior diplomat said.

“Imagine that you’re a refugee in Turkey, you’re Syrian – the risk exists that you might be transported one day . . . into northeast Syria. That’s a factor that could generate a wave towards Europe,” Luxembourg’s foreign minister, Jean Asselborn, told reporters at a meeting of interior ministers on Tuesday.

Turkey “is willingly risking further destabilising the region and a resurgence of [Islamic State] foreign minister Heiko Maas said. “Syria needs stability and a political process . . . however, the Turkish offensive now threatens to cause a new humanitarian disaster.”

European Commission president Jean Claude Juncker called on Turkey to immediately stop its operation in Syria. “If Turkey’s plan is to create a so-called ‘safe zone’ don’t expect the EU to pay for any of it,” he warned.

“Turkey has security concerns at its border with Syria, that we must understand. However, I call on Turkey, as well as other actors, to act with restraint,” he told MEPs.

But ambassadors in the EU’s Political and Security Committee have had difficulty hammering out a common position on the US withdrawal from the area concerned and the Turkish invasion. In the end, a declaration was made in the name of high representative for foreign policy Federica Mogherini.

EU foreign ministers will meet on Monday in Luxembourg to try again.

Hungary is reported to have blocked unanimity on a common declaration, citing its desire not to upset Turkey at this time. Frustrated diplomats say that Budapest’s position is part of a pattern of obstructionism on attempts by the EU to take common positions on foreign issues, which Hungary resents.

EU interior ministers at their meeting in Luxembourg on Tuesday expressed concerns the invasion might provoke a new wave of refugees to Europe. And they warned the eastern Mediterranean route from Turkey to Greece has once again become the main channel for asylum seekers reaching Europe.

There are concerns that refugees currently housed in camps in Turkey may decide that it is worth risking the sea crossing to Greece rather than face compulsory repatriation to northern Syria.

Turkish president Recep Tayyip Erdogan, facing increasing domestic hostility to the refugees, has threatened to resettle up to three million Syrian refugees from Turkey in the “safe zone” he hopes to establish. Most will end up far from their original homes and there are fears there could be tension with the Kurdish local community.

An EU spokeswoman said the union’s position remained that repatriation could and should happen only when the security situation was okay, guaranteeing the safety of the refugees, and only if the repatriations were voluntary. She said that the union upholds the territorial integrity and sovereignty of Syria.

Under the terms of the EU-Turkey agreement of March 2016, Turkey has received most of a €6 billion EU allocation to help feed and house the 3.6 million Syrian refugees settled in camps – more than 500,000 Syrian children have already been born in Turkey.

In return, Turkey agreed to stem the flow of migrants and refugees across the eastern Mediterranean. One key component agreed to in 2016 was a mechanism of returning people arriving from the Greek islands back to Turkey, once their asylum claim was checked.

For each Syrian returned, EU member states agreed to relocate the same number of Syrian refugees. That process has never worked properly, already a source of dispute with Ankara, which is demanding more cash.

EU diplomats are also concerned that the war in Idlib province, where about 400,000 have already been displaced since April, could turn into a humanitarian disaster.