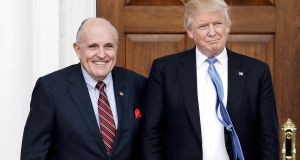 Two associates of Rudy Giuliani who have been centrally involved in efforts to investigate former US vice-president Joe Biden in Ukraine were charged with campaign finance violations on Thursday.

The men, who were arrested at Dulles airport just outside Washington, DC, late on Wednesday, were charged in court in Alexandria, Virginia, in connection with donations they gave to a pro-Trump re-election campaign fund and other campaign finance issues.

Two other men were named in the indictment – an American-born businessman, David Correia, and Ukraine-born Andrey Kukushkin.

According to the indictment unsealed by prosecutors for the Southern District of New York, they have been accused of funnelling “foreign money to candidates for federal and state office”. This includes a $325,000 donation to a pro-Trump super PAC that was already the subject of scrutiny. The non-profit Campaign Legal Centre lodged a complaint about the donation last year, arguing that the two men had used a shell company to hide the true source of the funds. Contributions by foreign donors are banned in the US.

The indictment also alleges that the men were involved in a scheme to contribute to other political campaigns, as part of their efforts to launch a marijuana business.

Mr Parnas, who was born in Ukraine, has long worked with Mr Giuliani. Together with Belarus-born Igor Fruman, both were involved in Mr Giuliani’s attempts to investigate former vice-president Joe Biden in Ukraine, introducing Mr Trump’s personal lawyer to key Ukrainian contacts.

The indictment also claims that the men sought to influence an unnamed member of Congress in a bid to encourage the removal of the then ambassador to Ukraine, Marie Yovanovitch, a career diplomat who was recalled early by the Trump administration in May. Ms Yovanovitch had been due to testify on Friday before three congressional committees as a witness in the ongoing impeachment inquiry.

Speaking on the south lawn of the White House as he left Washington, DC, for a campaign rally in Minneapolis on Thursday, Mr Trump said he did not know the two men. Asked how this was possible given that there was a photograph of him and one of the men, he said he had his photograph taken with lots of people. “I don’t know if there’s anybody I don’t have pictures with,” he said.

Mr Trump said he had not spoken to Mr Giuliani about the matter, but assumed the two men were his clients. Asked if he thought his lawyer would be indicted he said: “I hope not.”

As the House of Representatives continued with its impeachment inquiry, energy secretary Rick Perry was subpoenaed by three congressional committees on Thursday.

Mr Perry, who attended the inauguration of president Volodymyr Zelenskiy in Ukraine in May, was given until October 18th to turn over documents related to the impeachment inquiry.

House investigators are examining efforts by Mr Trump to ask the Ukrainian government to open an investigation into Mr Biden and his son Hunter’s business interests in the country. The US president requested the Ukrainian president to investigate a Ukrainian gas company which retained Hunter Biden as a board member while his father was vice-president.

Mr Giuliani, the former mayor of New York who is personal attorney to the US president, has spoken publicly about his visits to Ukraine where he sought to discover incriminating information about Mr Biden, a candidate for the Democratic nomination for president in next year’s election.

The former vice-president called for the first time on Wednesday for Mr Trump to be impeached.

“To preserve our constitution, our democracy, our basic integrity, he should be impeached,” he said during a campaign event in New Hampshire.

“He’s shooting holes in the constitution and we cannot let him get away with it.”

In his words and by his actions Mr Trump has “already convicted himself, in full view of the world and the American people”, he said.

“Trump will do anything to get re-elected, including violating the most basic forms of democracy. It’s stunning, and it’s dangerous.”

He added: “No president in history has dared to engage in such unimaginable behaviour.”