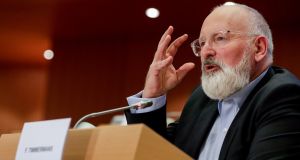 The new European Commission is encountering big difficulties in securing member state agreement on scaling up 2030 targets to reduce carbon emissions – while an ambition to reach “net-zero” by 2050 is still being resisted by a small number of countries.

The key revised target is a 55 per cent reduction in greenhouse gases by 2030 based on 1990 levels, but the extent of opposition has emerged over recent days.

Vice-president-elect Frans Timmermans said in the European Parliament, however, he would be “extremely surprised” if the new commission does not decide emissions need to be cut “by at least 55 per cent by 2030”.

He is tasked by EU Commission president-elect Ursula von der Leyen to develop a “European green deal” over the next five years.

The range of proposed measures goes beyond emissions to air and water quality, pesticides, microplastics, food production, biodiversity, energy efficiency and transport, he told the parliament on Tuesday. He promised to root out inconsistencies preventing ambitious climate action.

The commission “is in the middle of getting the information we need” to increase the 2030 target. “Just getting a target for 2030 won’t get us there, we need to know how we get there. If we really want to make our impressions and lead the world we really need to have our facts together before next year’s [UN climate talks] in Glasgow, ” he added.

Ms Von der Leyen proposed a two-step approach to increase the EU’s 2030 target to 50 per cent and possibly hike it to 55 per cent in 2021, contingent on action from other major emitters.

Environment ministers meeting on October 4th, however, merely agreed to “update” the EU’s current emission reduction pledge next year but fell short of saying by how much. Ten countries blocked attempts to commit outright to an increase there and then, but agreed the target would need to be updated before the UN’s climate conference in Chile in December.

While there is broad support for the EU to achieve net-zero emissions by 2050, the 2030 figure is proving to be more divisive. In 2018, a majority of EU states agreed on a 40 per cent reduction. Climate experts contend it may not be enough to keep global temperature rise below 1.5 degrees as agreed under the Paris Agreement.

The commission must ensure the EU’s target is 55 per cent, eight environment ministers urged Mr Timmermans in a letter this week. They represent Denmark, France, Latvia, Luxembourg, the Netherlands, Portugal, Spain and Sweden. An increasing number of countries are stepping up national plans to achieve net-zero emissions as soon as possible – Finland recently vowed to do so by 2035.

Ireland has supported greater ambition in relation to 2030 but has not committed to the 55 per cent figure, which would be require even more demanding measures in decarbonising the economy beyond the Government’s climate action plan.

Green MEP Grace O’Sullivan said: “We’re worn out listening to Taoiseach Leo Varadkar talking the talk about Ireland’s commitment to taking action on climate change; so it’s disappointing to note the absence of his or any other Irish minister’s signature on this letter.

“The EU needs to work together and ensure an increase in the EU GHG reduction target for 2030. It is vital that the EU decide, as a general principle, that the EU budget should not finance any policy that is not consistent with the goal of achieving climate neutrality by 2050 at the latest.The safety and future of humankind and the planet depend on committed, ambitious, united international action.”

“A long-awaited decision to massively scale up EU emission cuts has been delayed yet again at a time when millions of people take to the street to protest against government inaction,” said Wendel Trio, director of Climate Action Network (CAN) Europe. “Ministers keep dragging their feet despite the fact that the EU’s current targets are completely inadequate and would condemn the world to severe climate breakdown.”

The European Parliament voted on Thursday for an increase on climate action spending, calling for “a quantum leap in financial efforts to achieve the Paris Agreement goals”.

EU leaders gathering next week will discuss the next EU budget for 2021 to 2027.