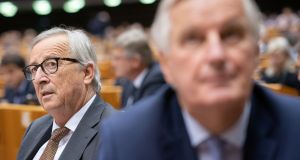 Jean-Claude Juncker, president of the European Commission, beside Michel Barnier, the EU’s chief Brexit negotiator, at the European Parliament in Brussels on Wednesday. Photograph: Jasper Juinen/Bloomberg

The idea of a “Stormont lock” on the Brexit backstop in any form is a non-runner, the European Commission made clear on Wednesday .

In Brussels, which is increasingly expecting a no-deal, EU leaders pointed again repeatedly to the huge gulf between the EU and UK, although they insisted they would go on talking right up to the EU summit next week.

Commission president Jean Claude Juncker told MEPs: “We are not accepting a blame game which started in London. We are not to blame.” And he reminded the UK that it was not only their parliament but the European Parliament which had to approve a deal.

A “third party”, like the Northern Ireland Assembly, could not be allowed to impose a time limit on the arrangements set out in the proposed withdrawal agreement, commissioner Guenther Oettinger told journalists.

He was responding after news reports, fiercely denied by diplomatic and official sources in Brussels, that the member states were ready to offer the UK a “consent” formula on the backstop involving a requirement for a “double majority” of both communities in the North.

Hard to disagree - reflects the frustration across EU and the enormity of what’s at stake for us all. We remain open to finalize a fair #Brexit deal but need a UK Govt willing to work with EU to get it done. https://t.co/5tUvb6m2K4

Reporting on the commission’s meeting, which heard a report from chief negotiator Michel Barnier on the state of Brexit talks, Mr Oettinger said that it was the longstanding position of the EU that any backstop or similar arrangement could “not be subject to a time limit. It cannot end after two or three years, or be set aside by a third party”.

A regional government in Northern Ireland would be such a third party, he said. “In the withdrawal agreement the text we have remains vital,” Mr Oettinger said.

Commission sources said it has long been willing to work on means of consulting Northern Ireland politicians on changes to a regulatory regime affecting them in the aftermath of Brexit, but that could not mean creating an opt-out mechanism. That would make the backstop conditional.

Speaking in the European Parliament later, Mr Barnier insisted that, even at this late stage, “if there is goodwill on both sides an accord is still possible”. He believed that reaching a deal was “very difficult but possible”, he told Sky News.

But, he told MEPs, the EU could not accept proposals that were both “hypothetical and conditional”. He reiterated that the UK proposals for customs controls in Ireland were completely untested and failed to secure “the guarantees provided for in the [withdrawal agreement] protocol”. The credibility of the single market was at stake, he said.

On the consent issue, he said that the EU could not accept the “unilateral right of the Northern Ireland institutions not to activate” regulations agreed democratically by the European institutions.

And he attacked UK attempts in the political declaration to water down market “level-playing-field provisions agreed with Theresa May”. That, he warned, would lead to unacceptable “social, environmental, and fiscal dumping”.

UK Brexit minister Stephen Barclay is expected in Brussels on Thursday for talks with Mr Barnier but UK sources were playing down the meeting’s significance, saying it was simply “an opportunity for a stocktaking”.

1 Love in a time of Covid: John and Mary marry over 40 years after first meeting
2 Two hundred Irish retailers for all your online Christmas shopping
3 Big Phil is being very big about his former boss’s Covid quarantine trip
4 Father unaware partner and baby dead until gardaí called to raise alarm
5 Coronavirus: Close contact numbers fall in sign restrictions may be working
Real news has value SUBSCRIBE